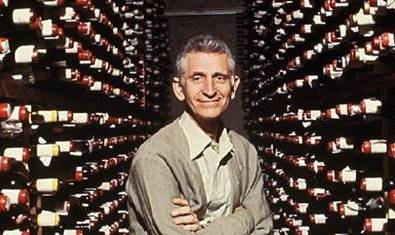 Located in the So-Ho section of Tampa, Bern’s has been an iconic dining destination since 1956. A second generation family-run steakhouse, it’s celebrated for its eight ornate dining rooms that serve up a gastronomic adventure that stamps Bern’s not as a meal but as a wondrous experience. New patrons are bedazzled by the foyer’s blood red velour, marble busts, gilt and the carved wood banister. Some say it resembles a high-end French bordello with steps leading to the upstairs rooms. (More on that later.)

Steaks are dry aged for five weeks, hand cut to your specified thickness and weight, and seasoned with salt, pepper, and butter. Bow-tied waiters train for more than a year learning all stations of the kitchen. They are eager to help you navigate the menu, asks questions about your tastes and do everything to ensure your satisfaction. Sommeliers chat up well-heeled regulars, extolling the exquisite vintages that lurk in Bern’s 500,000 bottle collection. Yes, I said a half-million.

The Daily Meal website ranked Bern’s as the second best steakhouse in America in 2013, trailing only Cuts in Beverly Hills. Input from 174 judges examined the quality of the steak, where it’s purchased, whether dry-aged or the level of freshness, the way it’s served and the overall steakhouse experience. In addition, Bern’s was saluted in The Daily Meal’s list of 101 Best Restaurants in America, coming in at number 28. 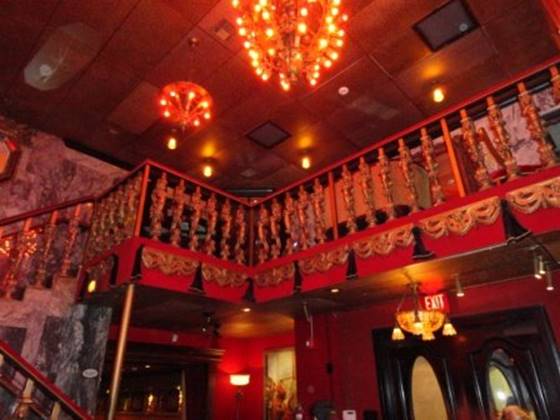 It is high praise for the workingman’s tavern that founders Bern Laxer and his wife, Gert, bought and refashioned from a 40-seat establishment to a 350-seat landmark, while the footprint expanded from one dining room to eight. Laxer died in 2002 at age 78, leaving as part of his legacy the largest bottled wine collection of any restaurant in the world.

“He was not shy about buying wine,” noted David Laxer, who carries on his father’s tradition. “He had the foresight to buy a lot of wines that were dirt cheap. He bought a lot of wine for $3 that now sells for $500.”

Bern’s is all about wonderful excess. The menu goes on for 16 pages, several of which are fascinating essays explaining how—in the restaurant’s favorite phrase—“We do things differently here.” Want to start with caviar? There are twenty-one selections, priced from $20–$220 per ounce. There are also two preparations of foie gras, two kinds of steak tartare (one with truffles), oysters prepared three ways, an impressive array of fish and shellfish, 16 different cheeses both domestic and imported.

My wife Jane and I arrived on the first Monday evening in March, a night they plated 500 dinners. 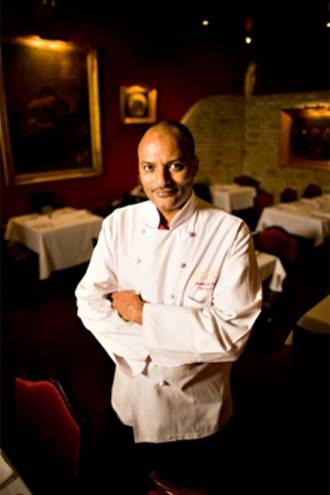 The man behind the kitchen magic is Chef de Cuisine Habteab Hamde. Affectionately known as Chef Hab, he emigrated from the small African country of Eritrea in 1983. When Hab settled in the United States, he left his culinary career behind and began attending the University of South Florida to pursue a degree in accounting.

“That didn’t last too long,” related Chef Hab with a half-smile. “I would go to class and take along a cooking book, fascinated by the newest dish I had heard about. Career-wise I think I made the right choice.”

We started our evening with a lovely bottle of 1985 Chateau de Vaudieu, appellation Chateauneuf de Pape and a surprise visit from Chef Hab who invited us on a personal tour of his kitchen following our meal . The menu, before the daily specials, is a book of culinary education, especially as to meat cuts and cooking terms, and provides a guide to your meal.

For the dinner courses, we put ourselves in the hands of Lee, a Bern’s waiter for a dozen years. With elegance and charm Lee piloted us through the voluminous wine list with parts that read somewhat like an exquisite novel, binding and all. He shared with us the book’s dedication:

At Lee’s suggestion we began with a perfect tasting trio of soups: the lobster bisque with golden mushrooms, roasted corn and smoked bacon; the French onion with garlic and spelt toast; and the viccyssoise with black truffle crème fraiche, Prestige caviar, and white truffle oil.

As soon as we finished up the soups, Lee was on hand immediately to replace the empty plate with our salads– one of baby spinach with goat cheese croutons, mushrooms, red onion and warm white balsamic bacon dressing, the other a Caprese with buffalo mozzarella, pesto, fresh basil, pine nuts and toasted garlic. 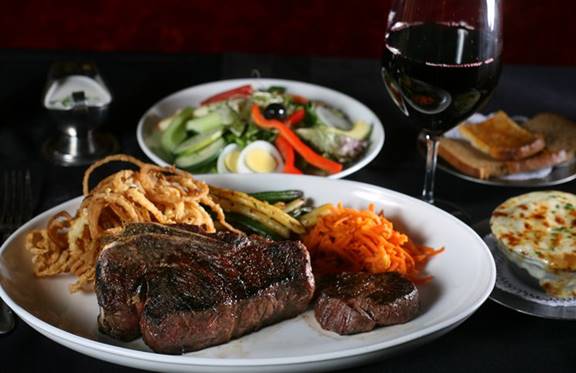 Perfection on a Plate

Jane settled on the Delmonico, the deeply rich eye of the rib, in Lee’s opinion “the sweetest and truly juiciest cut,” and it lived up to its reputation and then some. The strip sirloin was also elevated to an art form by longer, slower exposure to coals when ordered for two people – perfection in the beef world. Juicy, tender brimming with flavor, an eight to ten ounce steak was more than enough. All entrées are served with French onion soup, a house salad, fork-fluffed baked potato, crispy onion rings, and vegetables often grown at Bern’s farm.

Steaks are ordered by thickness, temperature, serving size and price. Meat selections are prepared exactly to order, and while there’s an extensive cooking chart, if you’re a few degrees one or the other to medium–rare for instance, just say so. The kitchen is also happy to butterfly your selection if you’re so inclined. 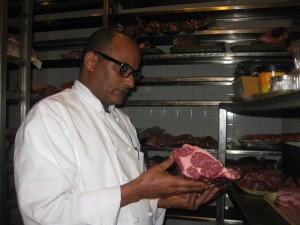 Lee escorted us to the sprawling kitchen where Chef Hab gave us a fascinating 15-minute tour. It is an impressive operation, given how Bern’s slices all of their own aged steaks to order. We visited the “meat locker” that houses 5,000 pounds of beef. The staff chops their fresh salads and side items. Two ladies’ only job is to present perfect baked potatoes. They do it exceedingly well. Bern’s grows its own herbs in wall frames, and the green coffee beans they roast daily are among the finest in the world.

Afterwards we were handed off to Phil, the major domo for decades of the massive wine cellar. Bern’s has about 100,000 bottles on site, plus another 400,000 next door in racks stacked floor to ceiling with hardly enough room to walk sideways down the aisles.

The restaurant’s wine cellar is truly a sight to see.  The entire room is climate controlled at about 68 degrees and 70% humidity, and a rich, fruity wine aroma emanates throughout the entire cellar. The aisles of the cellar are designed like your local library, bottles numbered in sequence. The wines range from the latest release of popular New World wines to century-old bottles never inventoried, which lends itself to some startling finds.

“It’s like mining for gems,” says Phil. “You never know what you’ll find.”

Four years ago, Eric Renaud struck gold. He was working in the rare wine room when he saw the bottle tucked away on a high shelf in the back. It was on its side, instead of pointed outward like the rest. It was a double magnum 1947 bottle of Chateau Latour. The selling price: $30,000, the most expensive wine in the restaurant’s history. 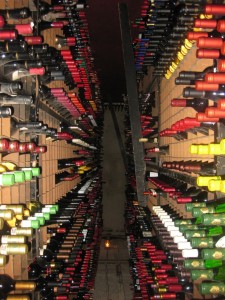 Bern Laxer had bought that bottle in the 1960s for about $100. It had probably been sitting there for decades, gathering dust but improving with age. Reportedly, fewer than two dozen bottles of it exist worldwide. Laxer amassed wine by the truckload in the mid to late ’70s when few others in Florida were buying it in large quantities. He would travel to vineyards, shipping ports and auctions around the country, buying cases upon cases and hauling it home to Tampa.

Phil navigates us over to the “rare bottle room” where Bern’s stores it most valuable bottles individually wrapped in plastic to keep the labels from deteriorating.

Afterwards we headed upstairs to the Harry Waugh Dessert Room, which consumes nearly the entire second floor. It’s only goal: an exquisite dessert to wrap up the end of the meal. Private booths made from old wine casks ensure a private retreat. Laxer purchased wine casks created from California redwoods and reconstructed them into 48 enclosed booths. Each booth is equipped with a sound system offering a range of music styles and even live music presented by the resident pianist located in the central lounge. Pick up the cubicle’s phone and make a request. 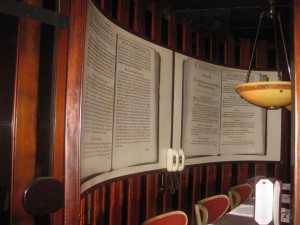 The classic Chocolate, Chocolate and Chocolate caught our eye. It’s a decadent treat of layered chocolate cheese pie, chocolate cheesecake, chocolate mousse on a chocolate crust served with whipped cream. The King Midas is a Bern’s original not to be missed, rich and moist carrot cake served with macadamia nut ice cream and hot fudge. We topped off our audacious evening with thrice-boiled sugared Turkish roast coffee and a 1985 Graham’s Port for Jane and a 1937 D’Oliveiras Sercial Madeira for myself.

It all adds up to a powerful accolade to its founder, Bern Laxer. So pay a visit to Bern’s which surely ranks as one of the world’s great dining experiences.