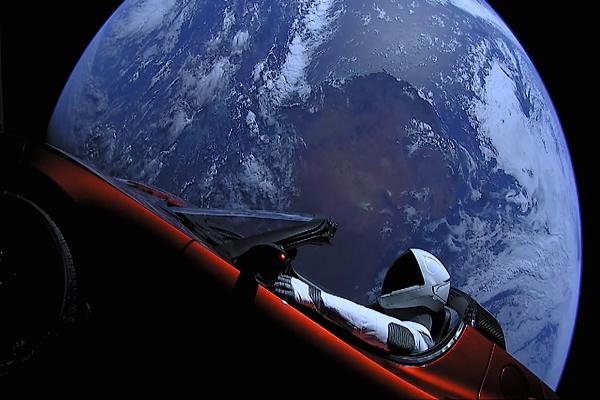 In early February the CEO and founder of SpaceX traveled from his Hawthorne, Cailf. headquarters to Cape Canaveral, Fla. to wittness the debut of his three-core Falcon Heavy rocket.  The most powerful rocket ever to leave earth was launched into bright blue skies, the biggest, brightest launch from the Kennedy Space Center since the last Space Shuttle flight. Standing an enormous 229 feet and measuring 40 feet wide, SpaceX’s Falcon Heavy is powered by 27 engines poroducing a 5.1 million pound force of thrust at lift off, equal to approximately eighteen 747 aircraft. That is more lift capacity than any U.S. launch since the last Saturn V in the 1970s. 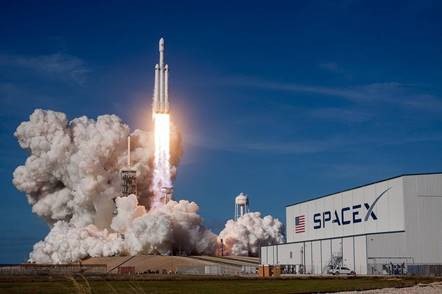 Eight minutes later SpaceX’s pair of F-9 side-core rockets landed seconds apart side by side at Cape Canaveral Air Force Station, deploying legs and coming to rest on twin pads. A pair of synchronized giant candles dropping from the heavens. The rockets unleashed powerful sonic booms that echoed across the Space Coast. An estimated 100,000 people had rolled into the Space Coast for the Falcon Heavy launch, and with area residents the total number was close to half a million. 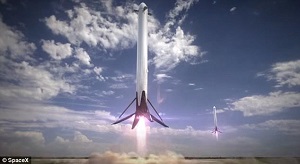 Onboard the historic flight was Musk’s personal 2009 Tesla, an all-electric, cherry red, rag-top roadster encapsulated in the rocket’s upper protective fairing. Within a half-hour after liftoff, SpaceX’s three cameras began beaming live views of car back to Earth. That webcast lasted 4 hours and 39 minutes before going offline.

The images showed “Starman,” a mannequin driver with his left hand guiding the wheel, barreling through the blackness of space with the shimmering sight of planet Earth in the rear view mirror. Starman is wearing the white spacesuit and helmet that astronauts will wear on SpaceX flights to the International Space Station. Accompanying the $100,000 roadster’s voyage is the music of David Bowie’s “Life on Mars” and “Space Oddity” playing at full volume on a continuous loop.

The message “Don’t panic!” is stamped on the dashboard along with a sign “Made on Earth by humans.” After reaching orbit, the Roadster coasted through space for about six hours before the Falcon Heavy second stage fired up one last time sending the car out into deep space and an orbit around the sun stretching way beyond Mars headed to the Asteroid Belt.

“I think the imagery of it is something that’s going to get people excited around the world,” Musk told Florida Today. “And it’s still tripping me out.” 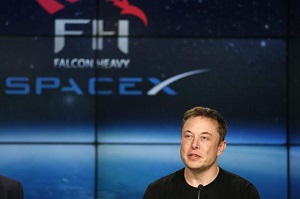 Shortly afterwards people in the western U.S. began describing rocket sightings in the evening sky. While SpaceX has not officially confirmed that the images or videos on social media were of the Falcon Heavy, it was the only rocket scheduled to be flying over the Earth at that time and place, so it seems highly unlikely these spectators saw anything else, according to Space.com.

Musk noted that outside of the earth’s atmosphere, the car’s cherry red color looked “kind of weird”, “too crisp” — proof that it was real.

“You can tell it’s real because it looks so fake,” he joked. “It’s just literally a normal car in space, which I kind of like the absurdity of that. It’s kind of silly and fun, but I think silly, fun things are important.”

The $90 million rocket is seen as a critical component for return missions to the moon– a high priority with NASA and the Trump administration. The Falcon 9 rocket bolstered Musk’s mission to slash the cost of spaceflight through the use of reusable rockets and hardware. The 45-year old billionaire believes SpaceX can revolutionize travel in the solar system and take humans to the moon once again and establish a city on Mars.

If you’re traveling to Florida this summer, consider a side trip to Cape Canaveral on the central coast. SpaceX is expected to launch two or three rockets a month in 2018, while United Launch Alliance, a partnership between Boeing and Lockheed Martin,  could launch another dozen.

Watching a rocket launch from a few miles away provides a unique perspective on the technology and power required to send spacecraft into Earth’s orbit. There is nothing quite like it. With more launches happening now than ever before, now is the time to witness the wondrous show.

The closest public launch viewing is from Kennedy Space Center and Cape Canaveral Air Force Station. Special launch viewing areas are made available to visitors. Get there early. Traffic can be hectic on launch days. Arrive when the gates open if you’re planning to see a morning launch. Give yourself plenty of time to get to your destination and expect long lines at the gate and in parking areas. For details on purchasing tickets check www.kennedyspacecenter.com.

There are also prime viewing areas outside of the complex including the shores of the Indian River, the Exploration Tower, the Canaveral National Seashore, the Cocoa Beach Pier or any of the beaches south of Port Canaveral. When planning to visit a rocket launch, it’s important to remember that dates are rarely finalized until a few weeks to a few months before each launch. And planned launches can be scrubbed or delayed due to weather or technical issues, even down to seconds before launch. So it’s important to make flexible plans and prepare to stay for a few days if you’re determined to catch the launch despite delays. 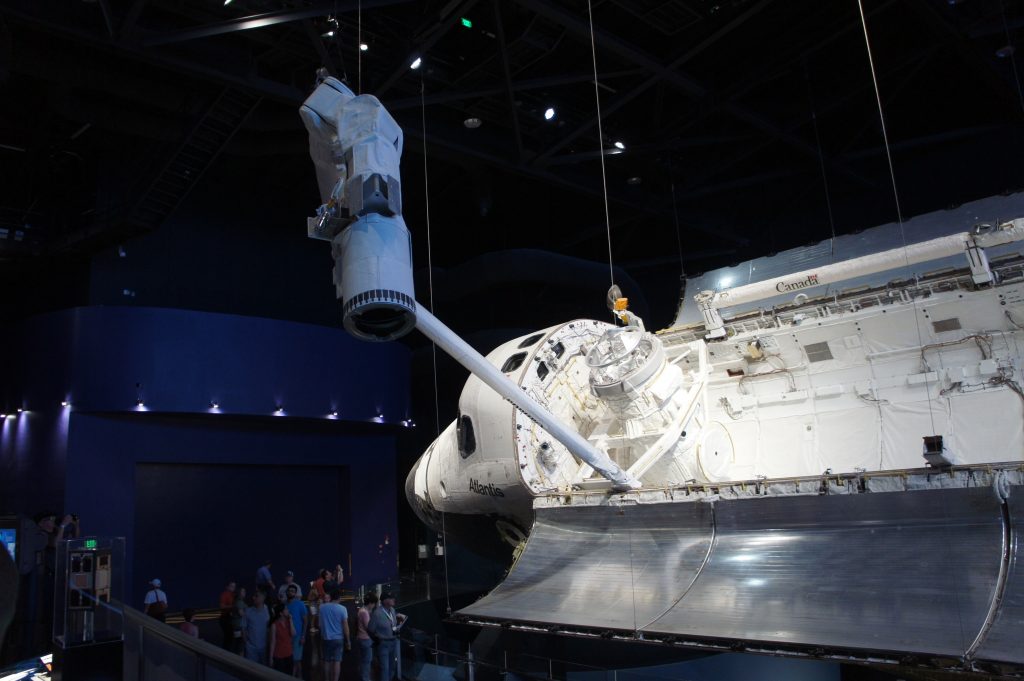 Check Space Flight Now (www.spaceflightnow.com/launch-schedule) for up-to-date information, and keep an eye on NASA, SpaceX and ULA Twitter feeds for additional updates. Another good resource is the local newspaper, Florida Today, (www.floridatoday.com) that streams rocket launches starting 30 minutes before the lift off.

Kennedy Space Center is home to the coolest space attractions on the planet. When you enter the gates, head over to the Rocket Garden that features eight authentic rockets from the past, including a Mercury-Atlas rocket similar to the one used to launch John Glenn into space in 1962. Don’t miss the guided bus tour. You will experience parts of the space program not otherwise open to the public. You will travel past the massive Vehicle Assembly Building (the world’s largest building) where NASA is currently constructing a rocket that will eventually take astronauts to Mars.

At the $100 million Space Shuttle Atlantis exhibit, a giant screen shows an IMAX 3D film on the origin and history of the space shuttle program that went to space and back 33 times. The video is accompanied by a soaring soundtrack. One of the most complicated and sophisticated pieces of equipment ever built, the shuttle was launched like a rocket, flew in orbit like a spacecraft, and landed on a runway like a glider.

When the video is over, the wall behind the front screen opens and you come face-to-face with Atlantis herself. A magical touch. Visitors experience a display as only spacewalking astronauts have seen her before — the Atlantis is rotated 43.21 degrees with payload doors open and its robotic arm extended, as if it had just undocked from the International Space Station (ISS).

There are more than 60 interactive exhibits and high-tech simulators that bring to life the complex systems and components behind this incredible feat of engineering. The shuttle fleet was the main method of transporting and building the ISS and other space wonders including the legendary Hubble Telescope. Interactive kiosks explain each section of the spacecraft. Kids and adults alike rush to climb into replicas of the pilot’s seat where you’re at the yoke ready to land Atlantis. 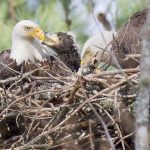 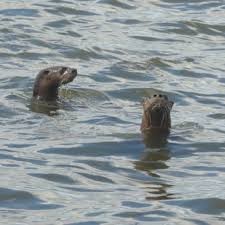 Virtually within the shadow of the historic rocket towers, prehistoric sea turtles carry out their renewal-of-life rituals. The surrounding beaches are the birthing place for hundreds of loggerhead, green and leatherback turtles that lumber ashore during the night, dig nests with their flippers and deposit 60 to 100, ping-pong ball size eggs that hatch in the late summer and early fall.

Established in 1962 and operated by the U.S. Fish and Wildlife Service, the Merritt Island National Wildlife Refuge provides a protected habitat for migratory birds and endangered and threatened species. Home to more than a dozen pairs of bald eagles, they perch atop high towers, trees or utility poles and  build nests more than six feet in diameter. There are more than 15 varieties of endangered wildlife near the Kennedy Space Center, including West Indian manatees that swim in the surrounding waterways.

Also near the space center is Canaveral National Seashore, created by Congress in 1975. With 24 miles of beach, it has the longest section of undeveloped beach along Florida’s eastern coastline home to 1,045 species of plants and 310 species of birds. Endangered species include sea turtle, manatee, Southern bald eagle, wood stork, peregrine falcon, eastern indigo snake, and Florida scrub jay. With beaches from south of New Smyrna Beach to Titusville, Canaveral National Seashore is one of the last of the Florida wildernesses.