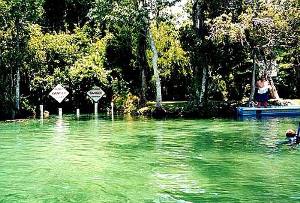 They are gentle giants. Known for whiskery faces and large, seal-like bodies that taper down to powerful flat tails, Florida’s largest herd of endangered manatees makes their annual migration to the Crystal River in November. The good-natured mammals can survive comfortably during the winter months in the natural warm springs that originate here and flow into the Gulf of Mexico. 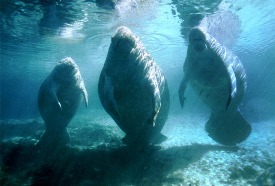 Each winter more than 500 of these friendly “sea cows” gather in King’s Bay, a newly protected sanctuary ten miles inland from the Gulf of Mexico.  It is one of the largest in the world. Thousands of visitors come to Crystal River every year to see and, even better, swim with the manatees in the clear warm waters.

With its enormous oak trees and wilderness waterways, Citrus County resembles what most of Florida must have been like a century ago. The Withlacoochee, a healthy 157-mile wilderness river ecosystem, forms the eastern and northern boundaries of Citrus County. Nearly half of the county has been designated as public parks and preserves destined to remain untouched.

Back in 1539, Spanish explorer Hernando De Soto and his expedition marched north from Tampa to Lake Tsala Apopka. Prior to the Spanish settlements, the region served as a ceremonial and trade center for Native Americans where each year approximately 7,500 people journeyed to the area to bury their dead and exchange ritual objects. These days visitors can stop by the 61-acre Crystal River Archaeological State Park, a national historic landmark, consisting of a six-mound complex with plaza, temple/platform, and burial mounds.

Rivers, forests and a beautiful coastline surround Citrus County’s 20 small towns that include Crystal River, Homosassa and Inverness.  In the 19th century Citrus County contained acres of orange groves and served as the hub of the citrus industry until the big freeze of 1896. It is a destination that boasts a rich history and plentiful landmarks that tell the story of northern Florida’s boom and bust economy.

You can’t throw a rock in this area without hitting a fishing charter service. Springtime brings black bass and trout. Add tarpon, sheepshead and grouper to that list come summertime. In the fall it’s time to fish for red fish, speckled trout, bass and grouper. Winter is snapper season. 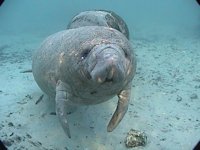 Easy-going Crystal River (pop. 4,000) has become synonymous with the West Indian manatees. In 1983 the Crystal River National Wildlife Refuge was established specifically for the protection of the manatees which had been recently named an endangered species. The sanctuaries were created after the Fish and Wildlife Service received numerous reports of harassment from concerned citizens, researchers and wildlife managers.

The manatees have two agile forelimbs that act like arms or flippers to help them maneuver in shallow waters. Averaging nine to ten feet in length, manatees weigh around 1,000 pounds but can grow as large as 13 feet and weigh 3,000 pounds. Calves are born weighing about 40 pounds, bulking up to about 700 pounds during their first year. Slow movers, most of their time is spent eating vegetation (100-150 pounds per day), resting, and traveling. On average, manatees can travel at least 40 to 50 miles a day.

Through the National Wildlife Refuge, boat and kayak tours can be arranged for spotting the manatees in their habitat. Guides will gladly help you with manatee etiquette; for instance, gentle contact is allowed, but only if initiated by the manatee. 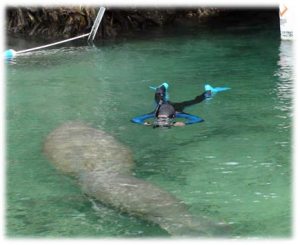 Those who want to get closer take to the waters with snorkels or scuba gear to swim among them. Swim slowly and stay calm and you may enjoy a manatee encounter for 15 minutes or more. If you’re lucky you might encounter a full face nuzzle, flipper hug, or body rub.

For a close-up view of manatees without getting wet, visitors can climb down into the underwater floating observatory or catch an education program at Homosassa Spring State Park. The oak-canopied village of Homosassa concentrates on fishing with plenty of charters, fish camps and fresh seafood on every menu. Historic attractions such as sugar mill ruins and a quirky printing museum explore the past.

Ted Williams lived here. Baseball fans can relive some of the game’s most spectacular moments, as well as learn everything they could possibly want to know about the baseball legend. An 80 seat sports theatre shows continuous videos of Williams and other all-time greats of the diamond.

Set in a rehabbed 1940s church in Crystal River, Vintage’s menu is southern, but not narrowly so. Delicious shrimp and grits– the secret’s smoked Gouda and a little bacon — have competition from an appetizer of firecracker shrimp, an Asian-inflected dish with deep-fried, wonton-straitjacketed shrimp paired with chili-garlic sauce and pineapple-pepper relish. They also offer 20 pours of wine by the glass and lots of liquid temptations. 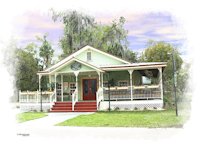 Running Deer Lodge resides on ten secluded acres near Inverness. It is a two-storied wood frame building with knotty pine interior walls, floors and ceiling that serves up an old-world charm. Hearty home-cooked meals are served in the Great Room with its 25-foot cathedral ceiling and floor to ceiling windows that look out over the tranquil grounds.  The dining area leads out to an open porch where visitors can enjoy English style afternoon tea or a glass of wine from a regional vintner.

A trip to Citrus County is like taking a step back in time. A beguiling Nature Coast destination where oaks dripping with Spanish moss border a slow moving river whose calm is only broken by the chug of a fishermen laden boat returning with the day’s catch.