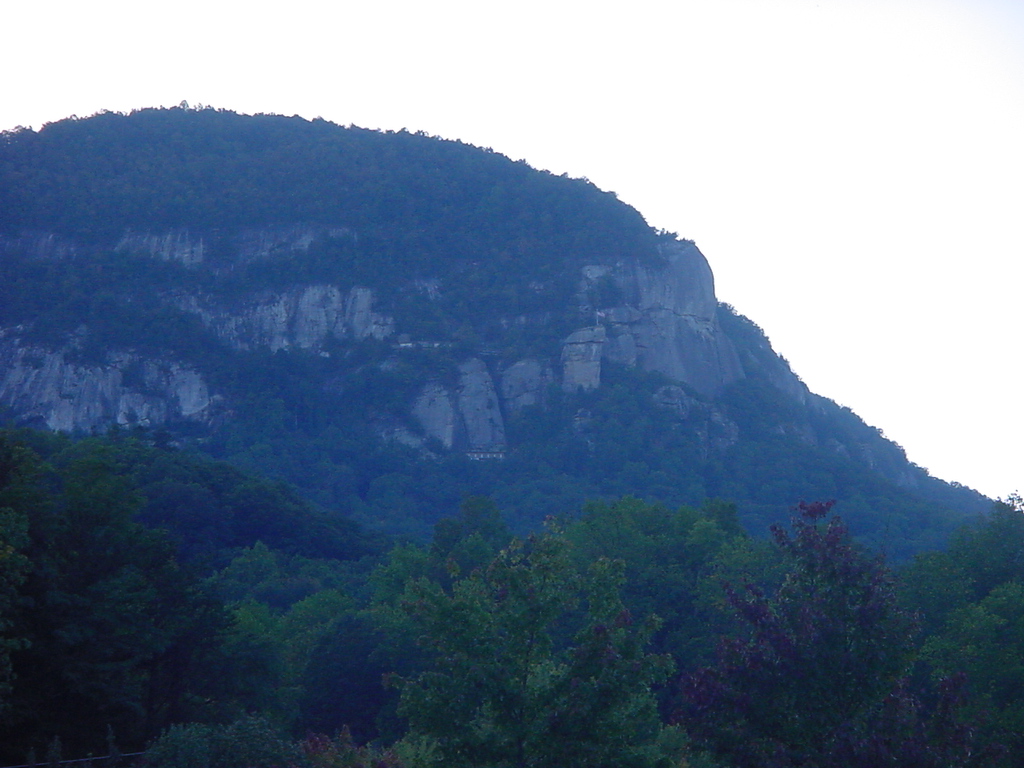 Nestled in the Hickory Nut Gorge twenty five southeast of Asheville and two hours west of Charlotte, lays the village of Chimney Rock and Lake Lure.

Take a ride on an elevator inside a mountain, hike to a waterfall, do some shopping, and go gem mining all in one day. Here’s one perfect day to take in it all.

Start out the day by visiting Chimney Rock Park. The park opens daily at 8:30am; arrive early to beat the crowds. Drive up to the top parking area. If it’s full, there is overflow parking just below. To the left of the gift shop, follow the dark, damp corridor to the elevator inside the mountain up to the Chimney Rock lookout area. The ride is included in the park admission and it only takes thirty seconds to go up 26 stories (258 feet). Once outside climb on the rocks where the view of Lake Lure and the surrounding mountains is spectacular.

Stay parked and don’t skip the hike to Hickory Nut Falls. It’s a fairly easy ¾ mile hike to a spectacular 404 foot waterfall. The roar of the water falling over the rocks can be heard long before the waterfall comes into view. For the adventurous who want to get their feet a little wet, climb behind the falls and on the rocks. They’re slippery so be careful!

Head back down the mountain to Chimney Rock Village and grab some lunch at Laura’s House. They serve big burgers, sandwiches and a traditional meat and three (for non-Southerners, diners pick one meat from a list and three side vegetables. And in the South, macaroni and cheese and homemade cobbler for dessert.

After lunch browse through the village shops. Stop in Bubba O’Leary’s General Store and Outfitters to pick up some candy and a t-shirt. Other shops provide souvenirs and wares from local artisans. Take a stroll along the Rocky Broad River and watch the fishermen catch some trout.

If the kids are in tow (or a kid at heart) then visit the Chimney Rock Gemstone Mine. It’s right in downtown Chimney Rock Village. For $15.00 you get a regular bucket and play prospector. The staff will show visitors how to pan in the flume and look for gems.

Hop back in the car and head east on Hwy 64/74A (Memorial Hwy). Stop at the Lake Lure Marina and take an hour long boat tour of Lake Lure. The guide will cruise past gorgeous lakefront estates each with their own boathouse, see the area where Dirty Dancing was filmed and learn how they flooded a deserted town when they made the lake, schoolhouse and all.

For dinner, get a pizza at La Strada’s restaurant, a local favorite. If the weather is nice sit on the patio and enjoy the views of Lake Lure. Breathe in the fresh mountain air and relax.

How to get there: