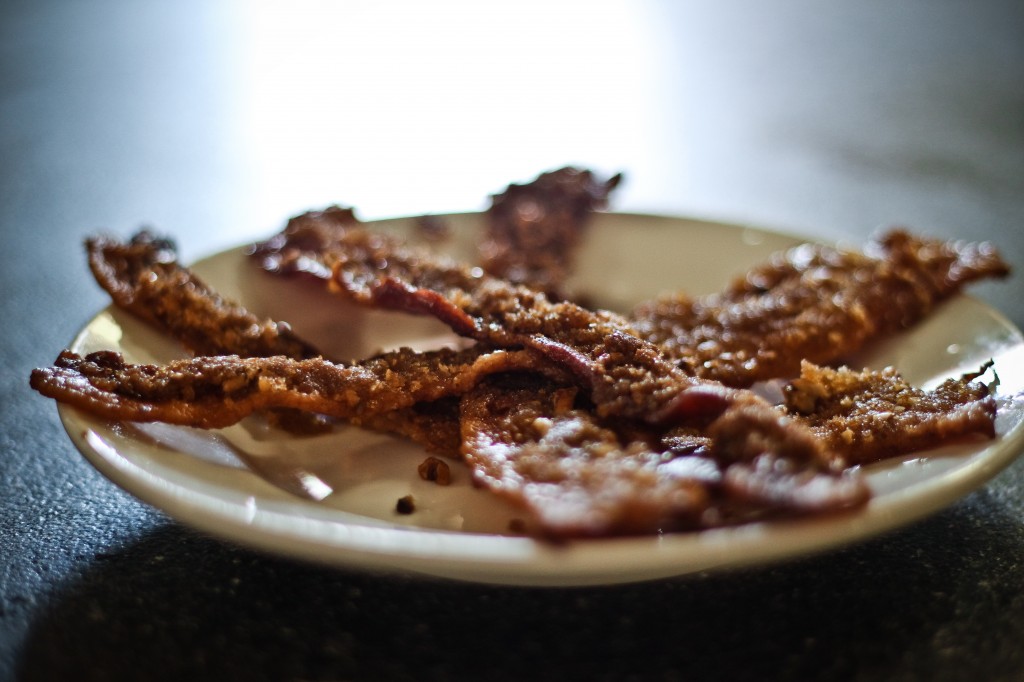 Grits and Groceries is a contrast of contradictions.  It’s seemingly out in the middle of nowhere yet it’s a busy little place. It has the exterior of a greasy, dive café but you’ll find they serve high-quality, fresh local cuisine. You don’t expect to find seasoned Paris-trained chefs from New Orleans, who worked with Emeril Lagasse, but here they are. 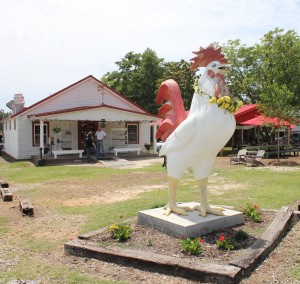 This “diamond in the rough” is located just outside of Belton, at the intersection of Highway 284 and Highway 185. You can’t miss it – not only is there a big chicken in front of the restaurant but there’s not much else around, unless you count the goats across the street.

Their tagline of “Real Food, Done Real Good” just about sums it up. Grits and Groceries serves up an eclectic blend of Creole, Cajun and Southern cooking or what owner Heidi Trull likes to call “New Orleans soul food”. With menu items like Praline Bacon and Hattie Mae’s Tomato Pie as appetizers and entrees like Charleston Stuffed Quail, Eggs Elizabeth and Shrimp and Grits, you’ll know that you’re in for a great meal that’s far from ordinary.
You’ll also find that people come from all over.  On Saturdays, you’re just as likely to find locals and people from the surrounding lake communities as you are visitors from Atlanta, Augusta or even Charlotte. There’s indoor and outdoor seating available and when the weather is nice, you can dine outdoors and bring your dog along. Everyone is friendly and don’t be surprised if they are really busy if you’re asked to share a table.

Heidi and Joe Trull moved to Belton about seven years ago. They had both grown up in the area and when Heidi found out she was pregnant, they decided it was time to move out of New Orleans and head back home.  They were incredibly lucky with their timing as they sold their home and successful New Orleans restaurant, Elizabeth’s, about a month before Katrina hit. 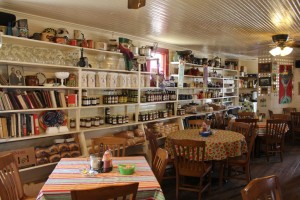 Joe spent ten years working at Emeril Lagassi’s Nola restaurant and is the resident pastry chef at Grits and Groceries.  Heidi is classically trained and studied in Paris as well as many high-end restaurants across the south. When they moved back to South Carolina they wanted something manageable and down to earth. They chose the name Grits and Groceries from a blues song and it just seemed to fit. 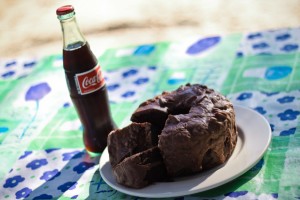 Grits and Groceries is only open for late breakfast and lunch and one night a week, on Thursdays, for dinner.  They also hold a private dinner club one Saturday each month.  Each dinner is themed differently with May’s theme being “The Best of the Church Cookbook Collection”.  If you want to attend one of these be sure to get tickets early as they only sell one hundred tickets and they always sell out.

The restaurant is housed in what was the “super Wal-Mart of its day”.  The original country store was built in 1929 and sold seed, feed, and other daily needs to the farmers in the surrounding cotton fields.  It was a county meeting place and is believed to be the oldest structure in Anderson County.

The menu changes depending on the season and what is locally available.  Heidi is in charge of the menu and likes to keep her ingredients’ within a one hundred mile radius. She’s always coming up with new ideas.  Her now famous Praline Bacon was the result of Heidi wondering “how can I make bacon even better?”  Now, her Praline Bacon is the “crack cocaine” of bacons. 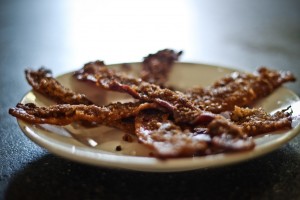 The grocery part in Grits and Groceries are items that they make such as spices, pastries, mixes, and breads.

Heidi’s philosophy of the less mainstream, the better, resonates in this small crossroads eatery.  Where they don’t take credit cards and if you don’t have cash, that’s okay.  It’s too far to the nearest bank so Heidi just says you can do an IOU and either mail a check or make it up on your next visit. Just bring your appetite.