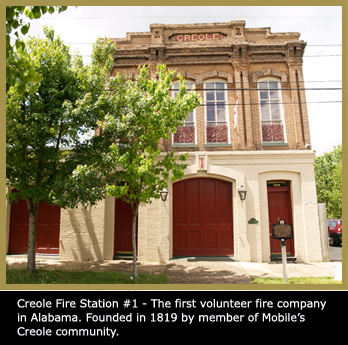 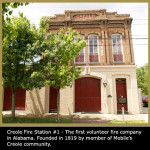 Mobile’s African-American Heritage Trail celebrates the contributions of the Port City’s black citizens by recognizing significant historic sites in the city. Brainchild of City Council Member William Carroll, the trail has been developing since 2006. Today, sites include the first African-American hospital in the state of Alabama; a town founded by survivors of the last slave ship to reach the United States;  and the oldest volunteer fire company in the state.

Dora Finley chairs the Trail’s steering committee. A group of private citizens and employees of the Mobile Historic Development Commission, the committee selected sites which commemorate a significant person, place or event in black history. “We had to start from scratch building the trail,” she says. “Some of the sites already had markers on them from the Alabama Historic Commission or the Historic Mobile Preservation Society, but we had to build the trail itself to get the information organized. We want to educate and instruct visitors to Mobile as well as residents to this unknown history.”

A ceremony at Mobile’s historic Saenger Theatre in January, 2009,  saw three plaques unveiled. “This was the grand finale of our first series of markers,” says Dora Finley. “We unveiled the marker for Michael Donald, who was the victim of a Ku Klux Klan lynching in 1981. Thanks to a lawsuit filed by his mother and the Southern Poverty Law Center, the United Klans of America was bankrupted.” Donald’s marker was placed on Michael Donald Avenue, near the spot where he was murdered. Another plaque which tells the story of Wallace Turnage, was placed at the Saenger itself. “The site where the Saenger is now was the home of a wealthy merchant, Collier Minge. William Turnage was his seventeen-year-old slave.” When Minge administered a beating to Turnage on Dauphin Street one day in 1864, the youth, told to “walk home,” walked instead to the Fowl River estuary, found a rowboat, and paddled into the midst of the Battle of Mobile Bay. Union sailors rescued him from his sinking craft, and he eventually wound up in New York, where he wrote an account of his escape.

The third marker was placed at the site of Mobile’s slave market. In additin to describing the slave market building, it commemorates  the survivors of the slave ship Clotilda. Although the importation of slaves had been illegal since 1808, the captain of the Clotilda brought a cargo of captured Africans into Mobile in 1860. Eventually, the captives settled in the Magazine/Plateau area three miles north of the city. The Heritage Trail includes the Union Missionary Baptist Church, founded in 1869 by the Clotilda survivors. In front of the church is a bust of Cudjoe Kazoola Lewis, the last survivor of the Clotilda captives. Another plaque marks the Plateau graveyard where many of the Clotilda captives were buried.

Union Missionary Baptist Church is one of the Heritage Trail sites that are still in use today. Others include Most Pure Heart of Mary Catholic Church, the first African American Catholic Church in Mobile. St. Martin de Porres Hospital on South Washington Avenue, established by the Catholic Archdiocese in 1947, was the first African American hospital in the state of Alabama. Perhaps the most interesting site still in use is the Creole Fire Company No. 1 headquarters.  Founded in 1819, the oldest volunteer fire company in the state was made up of members of African, French and Spanish descent. Today the building is the home of Tilmon and Jamie Brown, who renovated the circa-1869 midtown firehouse. Yes, they kept the pole—Jamie describes it as a “great way to get downstairs fast.”

The African- American Heritage Trail fulfills its mission of informing visitors and residents in several ways. School bus tours are available for local children. The internet component of the Trail, reachable by link from the City of Mobile’s Historic Development Commission website at www.mobilehd.org/aaht, includes a downloadable narrative and map for a self driving tour. For groups visiting Mobile,  step-on bus tours have been developed using docent tour guides. Groups can make arrangements for these guides through the Mobile Historic Development Commission.

For Dora Finley (who received the Black Heritage Council’s Idella Childs Distinguished Service Award in 2008 for her contribution to developing the Trail), the Heritage Trail is vital to preserving Mobile’s black history. “We want everyone who comes to Mobile to have the opportunity to learn about these unsung heroes.”

For more information on Mobile’s African-American Heritage Trail, visit the website at