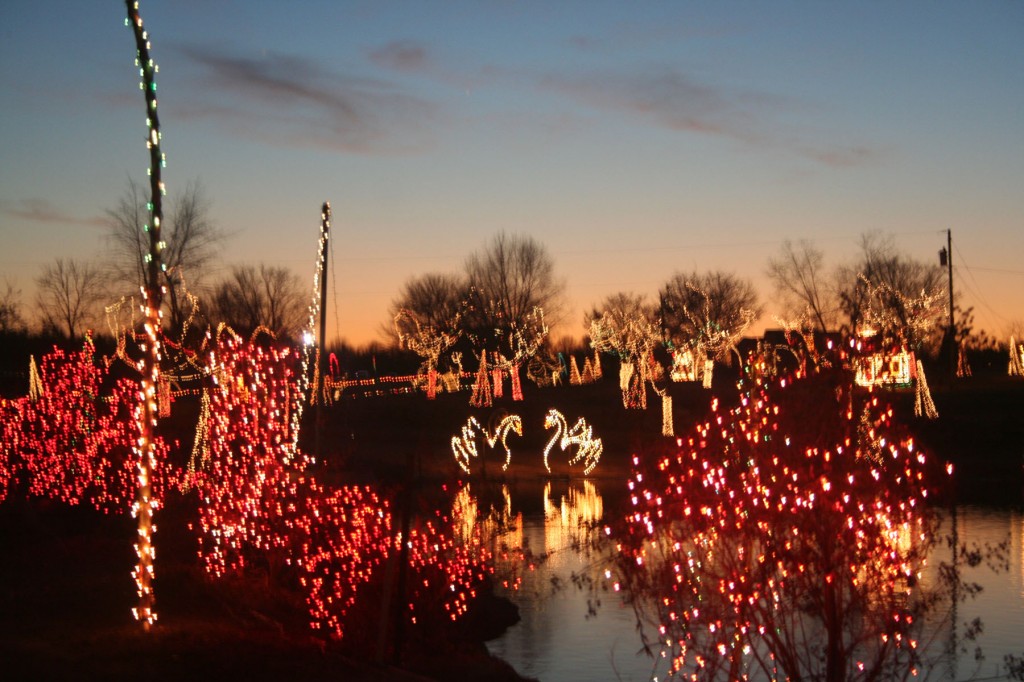 For the past twenty-two years, Hollywild Animal Park in Wellford, South Carolina has opened up its 100-acre safari from Thanksgiving to New Year’s Day for their annual Hollywild Lights Safari.  This unique holiday experience allows visitors to drive through the open range area of the park with stops to feed the animals and motor past millions of dazzling holiday light displays.  Money raised during the event goes to care for their resident animals throughout the year.

There are nativity displays and light sculptures such as dancing reindeer all while holiday music is playing from loudspeakers nestled in the displays.  “We try to give people great, unforgettable holiday moments,” says David Meeks, Founder and Executive Director of Hollywild.

The tour also takes visitors through Deer Park, where from your car, you can feed free-roaming deer,

zebra, geese, antelope and cows. On weekends, when the park is packed, this gives a whole new meaning to the phrase “deer in headlights”! The animals move from car to car and while the deer are a little skittish, it’s not unusual for a zebra to stick its head in your car window to get something to eat.  About 100 animals are out at a time and even though it may seem like chaos, it’s all organized as park employees are on hand to keep an eye on the animals.

Once you’ve finished at Deer Park (there is no time limit) you’ll drive past more light displays until you get to Santa’s Village.  This stop keeps getting bigger and better each year and allows you to get out of your car and enjoy a huge bonfire with hot dog and marshmallow roasting, hot cocoa and cider. There are baby bottles available for purchase that you can use to feed baby goats, pigs, deer and antelope. You can also feed and pet other animals such as donkeys, goats, llamas, bison and Holstein cows.

While at Santa’s Village, be sure to visit the lookout spot at Mrs. Claus’ Candy Shop.  This is a great photo opportunity as you can see the light displays over the whole park. Another must-do here for the kids is to take a pony ride through the enchanted forest.  The ponies meander through a tree-lit path which is a much better experience than riding around in a circle as other parks seem to do. Of course, it wouldn’t be Santa’s Village if Santa didn’t make an appearance.  The big jolly man hangs out on his sleigh and parents can get a photo of their kids next to Santa driving the sleigh. “We want kids to have a blast…to be the highlight of their Christmas memories.” says Mr. Meeks.

Each year there is something new – whether it is changes to the light patterns, different animals in Santa’s Village or new displays.  This year Hollywild has added a Holiday Lights Safari Package for groups. “We’ve had so many requests for group holiday parties and birthday parties during this season that we’ve created special packages we know people will enjoy.” explains Mary Lee Rollins, Hollywild’s Assistant Director.  Group packages include the Ann Arbor Party Bus and a Party Hostess that will take you through the park so that up to thirty of your closest friends can enjoy it together.

Special guests will also be making an appearance this year at Santa’s Village.  On Friday, December 7th and Saturday, December 15th from 6 – 9:30 pm, “Sparkle City Sings,” a group of young singers will be walking through the village donning Dickens Era costumes and singing seasonal favorites.

The Hollywild Lights Safari is open every night (including holidays) from 6pm until 9pm with extended hours on Fridays and Saturdays from November 17th through January 5th.  Admission is $6.00 per person while animal food, pony rides and photos are extra. For additional information, including group rates, call the park office at (864) 472-2038 or visit online .