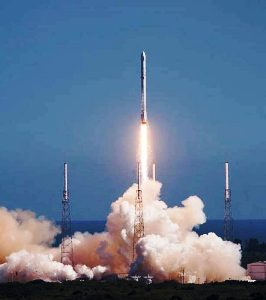 It is one of America’s magical roadways. A north/south route, Highway A1A sprawls out in sections along Florida’s entire Atlantic coast. Cruising along A1A in Central Florida we pulled into the towns of Melbourne Beach and Indiatlantic located on the barrier island between the Indian River and the Atlantic Ocean.  Relaxed and unhurried, the twin sister towns offer unspoiled beaches with sparkling blue-green waters and large dunes blanketed with sea oats and native wildflowers. 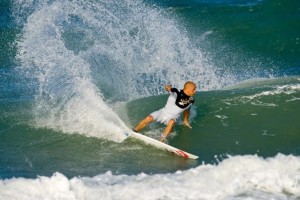 Melbourne Beach (pop. 3,200) is one of Brevard County’s older beach communities and is named after the famed Australian coastal city. Travel A1A fifteen miles south and you come to Sebastian Inlet State Park. Sebastian’s jetty break is recognized as one of the surf world’s high-performance hot spots.
The inlet has been home to at least three generations of world-class surfers, including 11-time world champion Kelly Slater. Monthly events and big-name surf camps are staged here. There are also entry level activities such as inflatable paddle boards, it’s not all championship level stuff. In 1994 a part time treasure hunter diving in eight feet of water about 100 yards from the wave break “First Peak” found $1 million worth of jewels and gold coins from a Spanish galleon that sank there more than 250 years earlier.

Just across from the ocean in Indiatlantic, the Beach Bungalow is a small compound of two bedroom tropical villas. They are all dog friendly and feature private, fully fenced gardens with hot tubs and loads of custom wood and tile work throughout the villas. The Bungalow is located within a couple of blocks of an eclectic selection of restaurants and shops.

After watching a glorious sunrise over the Atlantic, we walked over to the Beachside Cafe on colorful 5th Avenue. The house specialties include eggs

Benedict; a skillet dish with eggs, breakfast meats and veggies; salami and eggs; and stuffed French toast. The light and fluffy pancakes, the hearty size of frisbees, can be stuffed with blueberries, strawberries or bananas.

Next door is the Longboard House that has been around since the early 1960s and stocks more than 1,000 surfboards and paddle boards, shipping them around the world with tilt detector attach to them to make sure its safe. In the “Green Room,” you will find artistic boards, functional ones and eco-friendly boards. In addition, they custom design boards to your specifications.  The shop has long-time relationships with master longboard designers and also sells a good selection of shortboards.  Longboard also offers a nice clothing selection and top name brand beachwear and quality accessories, though it can be a bit pricey.  Not a touristy spot, very local and very friendly. Worth a visit.

Nearby Melbourne, a cosmopolitan feel

Three miles over the US-192 causeway that crosses the Indian River, visitors enter the historic city of Melbourne (pop. 75,000). East New Haven Avenue is its main street, head over to the 700 to 900 blocks. They sport a cosmopolitan feel with antique stores, clothing boutiques, restaurants, nightclubs and coffee shops. North of downtown Melbourne is the community of Eau Gallie. Once its own city, the handsome Eau Gallie Arts district is a great place to while away an afternoon browsing shops, art galleries, the botanical gardens or enjoying a nice meal at one of the highly touted eateries and cafes.
Ichabod’s Dockside Bar and Grille is located just off US-192 on Front Street.  It’s a cozy  hangout that overlooks the Melbourne Harbor Marina. We stopped by for lunch of mahi fingers, conch fritters and tiger shrimp tacos. Daily specials include the Peruvian ceviche appetizer, and bacon wapped salmon topped with horseradish cream sauce over rice pilaf.

Since opening in 1978 the Foosaner Art Museum has amassed over 5,000 objects, spanning 2,000 years of creative history. The museum’s permanent collection includes works by 20th-century Central Florida artists, Asian ceramics and metalwork, along with modern and contemporary works on paper. At the heart of the Henegar Center for the Arts, housed in a 1919 school building, is a 493-seat proscenium-style theater designed by a Tony Award-winning Broadway set designer. The main stage curtain came from the original Broadway production of The King and I.

Another cultural gem is the Melbourne Civic Theater. Now in its 64th season, MCT has provided a wealth of memories and a healthy dose of the magic that is theatre. Stage shows this season range from “Jacob Marley’s Christmas Carol,” to “The Price” by Arthur Miller. 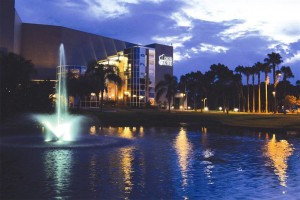 Back on Melbourne Beach we travel south on A1A that brings us to a series of secluded and undeveloped natural beaches. The land narrows down to as little as 15o feet from the ocean to the river. The 250-acre Ponce de Leon Landing Park has public parking, restrooms, outdoor showers and two dune crossovers. Scholars are unsure precisely where Juan Ponce de Leon made landfall in Florida. Melbourne Beach jumped into the debate two decades ago, when a modern day explorer re-sailed the path of Ponce de Leon’s 16th century voyage and concluded the Spanish conquistador likely came ashore here. 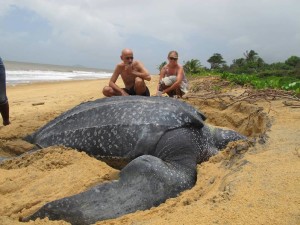 1,000 nests per mile have been recorded.

Boating is a huge slice of life here. Kayaks, canoes, fishing craft, pontoon boats and the occasional paddle board dot the spectacular shoreline. A fair amount of those watercraft are headed to Sebastian Inlet State Park which connects the Indian River Lagoon with the Atlantic Ocean covering over 600 acres and spans both sides of the inlet. The mile long Hammock Trail winds through a coastal, subtropical, palm and oak hammock and along the fringe of the mangroves. Visitors have a chance to view over 180 species of birds such as gannets, jaegers, shearwaters and petrels during the course of the seasons.
In the water surrounding the park, Atlantic bottlenose dolphins are commonly seen. Manatees inhabit the waters from March to October. The right whale, most endangered whale species in the world (0nly 300), can sometimes be observed traveling close to the coast during January and February.

Sebastian’s premier surfing spot “First Peak” is where many professional surfers have honed their skills. Another is Monster Hole, about a third of a mile off the beach on the south side. The contour of the ocean floor rises up when the surf is big here, giving long rides. The flat-topped Sebastian jetty, usually lined with fishermen, makes an ideal vantage point for spectators and surf photographers. One of the premier saltwater fishing spots in Florida, anglers pull in redfish, mackerel, flounder, sheepshead, drum and huge snook from its jetties.

Five miles back north on A1A brings visitors to the legendary Sebastian Beach Inn. Housed in Brevard County’s last remaining Coastal Watch Station, the site was used as a “safe haven” for seafarers from 1903 to shortly after WWII,  as well as housing the men that guarded our shores. A movie producer named Bert Green took over in the 1950s and invited many of his Hollywood friends to come and party overlooking the turquoise ocean. Today, SBI is a hot spot for high energy bands, pub grub with an island twist and chilled libations on weekend afternoons. Order up a Bahama Mama, SBI’s original drink. Over the past four decades some of the great bluesmen have performed here, including Edgar Winter, Leon Russell, Greg Allman, Savoy Brown, Dr. Hook and Spirit. Boasting a sprawling timeworn mahogany bar inside, you’ll find their signed photographs hanging on the wall. On a dazzling Sunday afternoon we caught Hot Pink with an impressive repertoire that ranged from Stevie Wonder to Elton John, David Bowie to Mott the Hoople, The Doors, and the Stones.

Back in “downtown” Mel Beach you can enjoy those fresh catches at the Ocean 302 Bar & Grille. Opened in late December, it’s owned by Charlie Zubi and is next door to his market. There are cozy booths, large and small tables or you can sit at the bar overlooking the kitchen and watch the food being prepared (here are some popular dishes in Melbourne).  The menu is quite imaginative, and offers a bevy of farm to table selections. The pig and fig pizza caught our eye– a combination of pork, cheese, figs, caramelized onion, pecans and aged balsamic vinegar, as well as the sloppy short rib sandwich with duck fat fries. Ocean 302 offers 20 or more beers on tap and, as you would expect from the Zubi family, a superb wine selection.

Stroll west on Ocean Avenue a few blocks and you arrive at Djon’s, a local favorite that draws business folks and surfers alike. Start with a drink on the patio by the cozy fire pit surrounded by multiple sofas– a great place to meet new folks. On our visit we chatted with Brad Stein, Melbourne Beach’s world champion ballroom dancer and antiques dealer. We ordered their house salad, snapper special, and a filet mignon that were all standouts. Head over to the piano bar in the lounge, it’s a great spot for an after dinner drink.

If you time your visit to Melbourne Beach correctly, you might even view a spectacular rocket launch. There is nothing on earth like a rocket launch 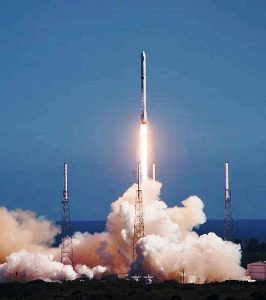 (especially at night), and Cape Canaveral is just 30 miles north up A1A. Private rocket companies such as Elon Musk’s SpaceX  are revolutionizing the business and technology behind space travel by reusing rockets, dramatically reducing the cost of space flights.

On April 8th history was made. It was a scene straight out of a science-fiction movie. SpaceX launched one of its Falcon 9 rockets into space and then the first stage booster glided smoothly to a hover before landing on a floating droneship in the Atlantic Ocean a few minutes later. The rocket’s main component landed upright onto the barge the size of a football field while dealing with 50 mph winds.

Blast-off! Touchdown! Another slice of this special destination on the Space Coast.