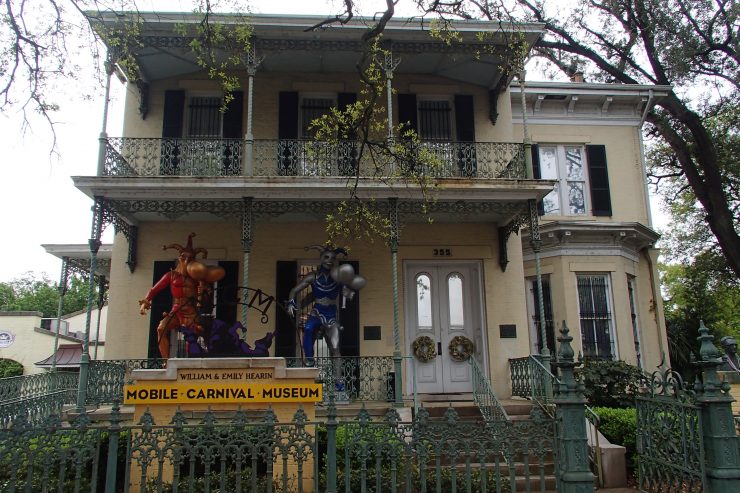 Mobile, Alabama, is the original home of Mardi Gras. 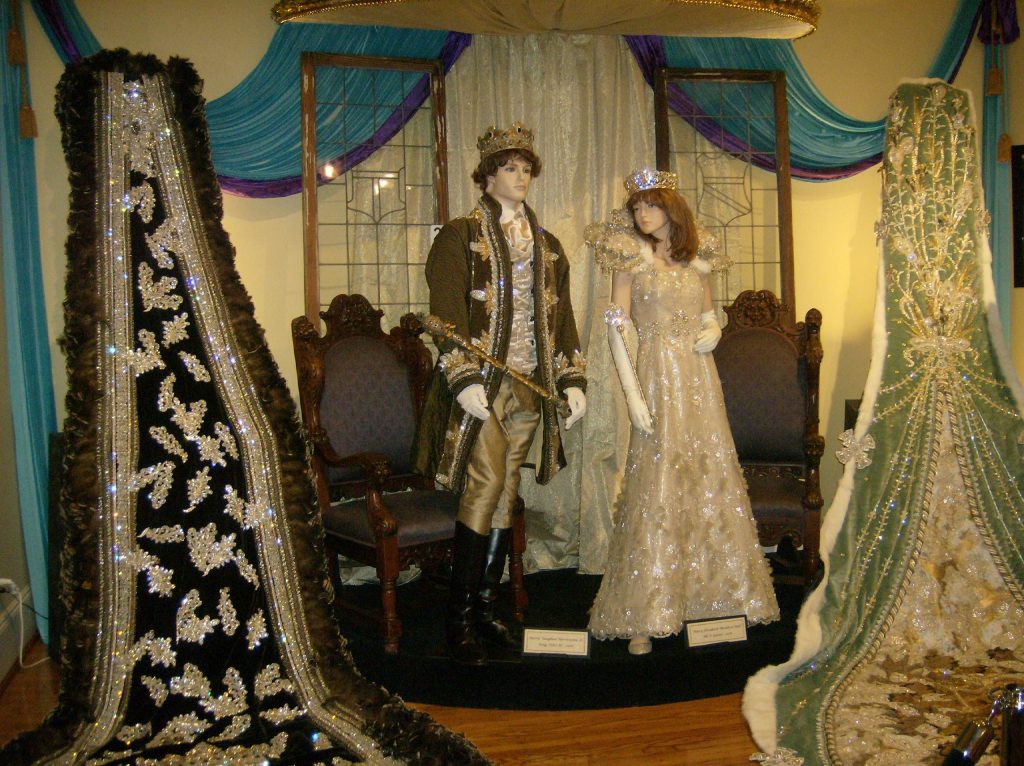 Mardi Gras was observed for the first time in the New World in 1703 by French pioneers living at the site of the first settlement of Mobile. In 1711, the first carnival parade in North America took place in Mobile. This parade was low-tech; revellers pulled a papier-mache bull down Dauphin Street. In 1830, things escalated. A group of sports led by one Michael Kraft woke up the mayor, having first raided a hardware store for cowbells and rakes. Rather than opening fire, the mayor welcomed the celebrants; thus was born the Cowbellian de Rakin Society, the first parading society in America. Today, the Port City boasts more than 60 mystic societies, some parading and some non-parading, yet all ready to party. 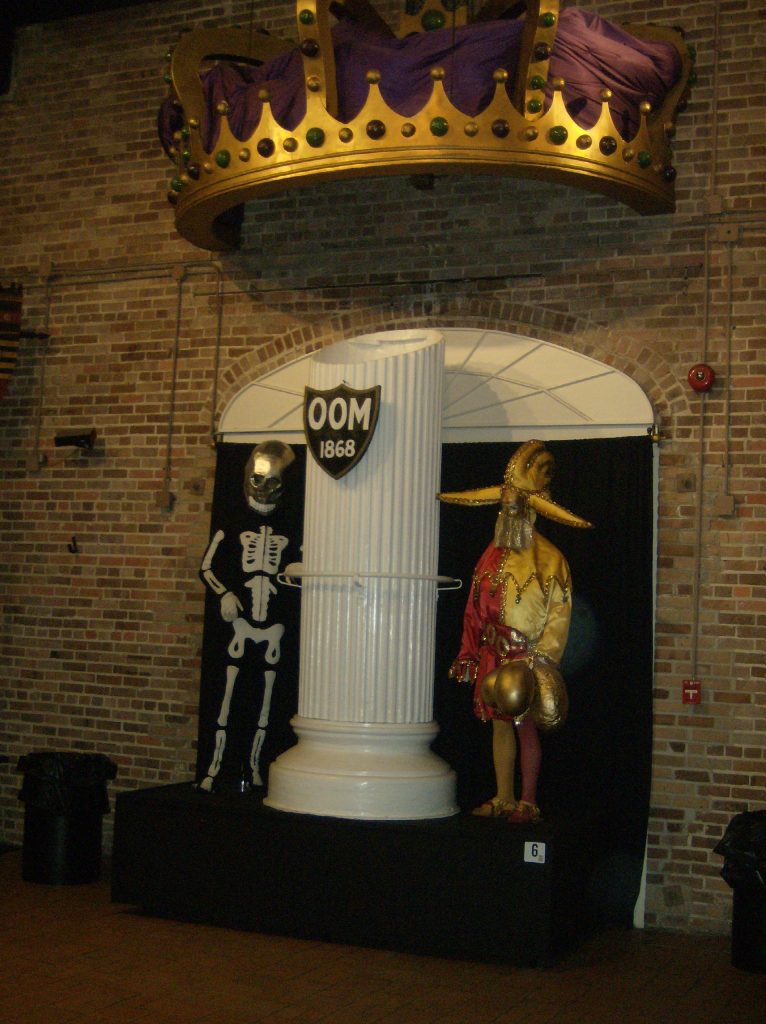 The emblem of the Order of Myths mystic society

The best place to find out about Mardi Gras in Mobile is the Mobile Carnival Museum. Opened in 2005 in an elegant downtown mansion, the Museum has as its aim the celebration of the two faces of Mardi Gras—regal and raucous. Judi Gulledge, Executive Director of the Mobile Carnival Association, says that visitors are surprised by “the amount of pomp and circumstance” that accompanies Mardi Gras in Mobile. They know about parades; they don’t know about the celebration’s royal aspect—the elaborate carnival courts, complete with crowns, sceptres and massive, bejeweled robes and trains. All Mobile’s mystic organizations have their own royalty, but things really get regal with the public coronations of the King and Queen of Mardi Gras.

Both the Mobile Carnival Association and the Mobile Area Mardi Gras Association host coronations which National Geographic magazine compares to the ceremonial launching of European heads of state. Visitors to the Museum can gape at fourteen galleries full of gorgeous, elaborate trains and other regalia—all made locally, all customized to reflect the monarch’s personality, lineage or lifestyle. “Each train tells a story” says Judi, featuring everything from quail hunting to an image of the Palace of Versailles. 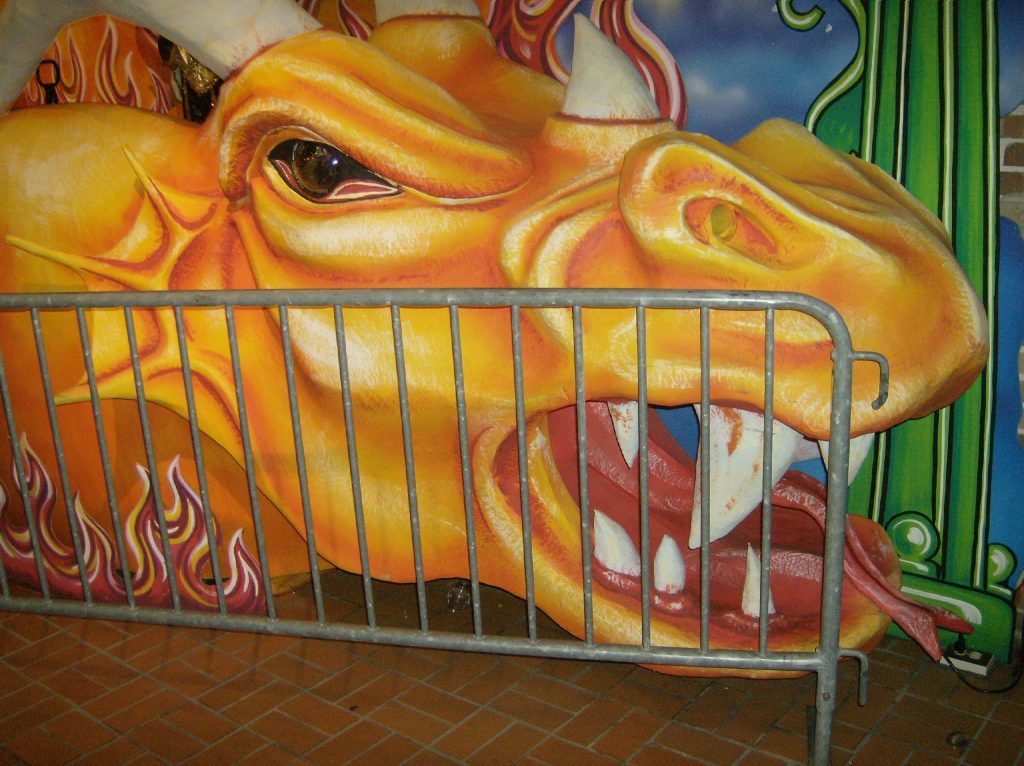 Vernadean, beloved dragon of the Mystics of Time society

Mardi Gras’ season of hilarity cranks up sometime after January 6 (Epiphany) and culminates on Mardi Gras Day, which this year falls on February 28. If you’re not content to watch from the sidelines, show up on February 26  for the Joe Cain Day Parade, billed as the largest street party in the country and open to everyone.

The Mobile Carnival Museum, located at 355 Government Street in downtown Mobile, is open Monday, Wednesday, Friday and Saturday, as well as every other Thursday during Mardi Gras.