They ain’t whistling Dixie so much anymore.

Long revered as the heart of the Old Confederacy, Richmond stubbornly has earned its reputation as being mired in the past. No more. Today, it’s a robust destination, one of the cultural pillars of the “New South.”  Century-old tobacco warehouses have been transformed into lofts and art studios and the city’s buttoned-up downtown (it’s the state capital) now has life after dusk. Moving beyond its obsession with the Civil War, Richmond has emerged as a new player on the Southern arts and culinary scene. It’s also attracted its share of Hollywood film crews.

Lying on the fall line of the James River in central Virginia, the waterway flows through the heart of downtown. It’s the only urban setting with Class III and IV rapids, rafting trips can range from mild to wild. Float along the river, and keep an eye peeled for native deer, blue herons, ospreys and bald eagles or pack your rod and reel for the best smallmouth bass fishing.

Celebrating its 275th birthday this year, the city has largely preserved its historic neighborhoods, including the architecturally stunning Fan, one of the largest clusters of turn of the 20th century row houses in America. Although Carytown is only one street long, visitors marvel at the variety of funky boutiques and eateries in this nine block district, home to the classic Boyd Theatre that spotlights second run movies. On Saturday nights the $1.99 film is preceded by a rousing sing-along accompanied by its mighty Wurlitzer organ.

No trip to the Richmond is complete without a drive down tree-shaded Monument Avenue. Thousand pound bronze statues of Lee, Jackson, Jefferson Davis and others line the center parkway leading downtown to the White House of the Confederacy.  Lee’s statue was the first monument erected. In May, 1890 at its unveiling, there were an estimated 100,000 people in attendance. Monument Avenue is the only street in America listed on the National Registry of Historic Places.

Maymont Estate has plenty of history too. Completed in 1893 at the close of the famed Gilded Age, James and Sallie Dooley spent the next three decades filling the 33-room mansion with lavish and over-the-top treasures from around the world. Wildlife exhibits are scattered throughout the 40-acre valley between the historical estate and the Children’s Farm and Nature Center. They feature native Virginia wildlife in their natural habitats, including black bears, bison, white-tailed deer, gray fox, bobcats, bald eagles, owls, and other birds of prey. 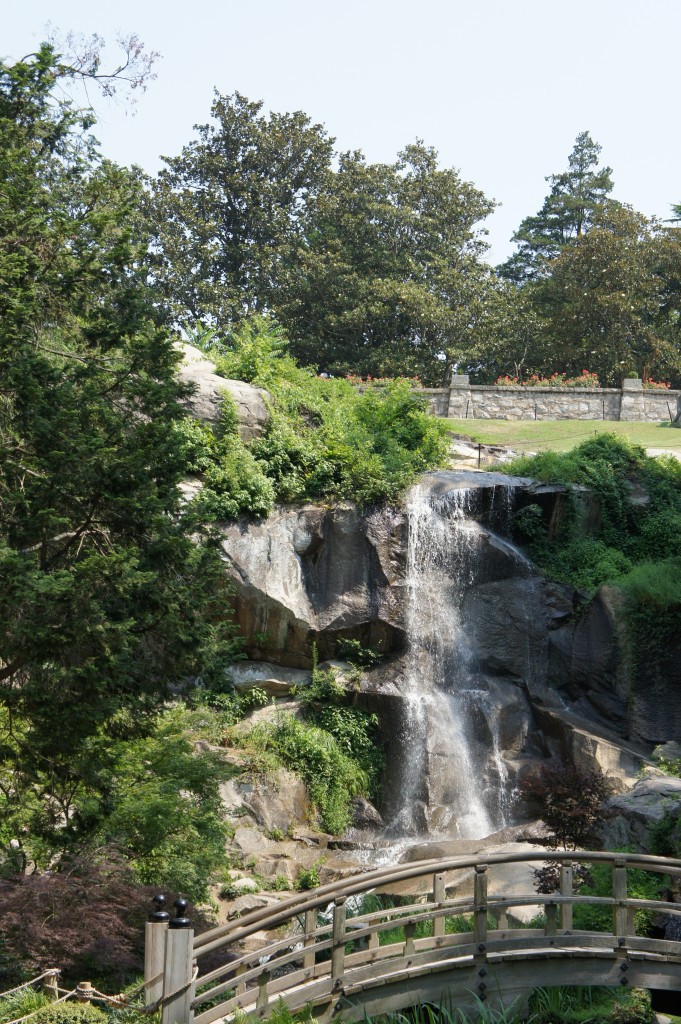 This year marks the 100th anniversary of Maymont’s beloved Japanese Garden. Peaceful yet brimming with life, narrow winding footpaths lead visitors past clusters of tall bamboo, manicured trees and shrubs to a 20-foot waterfall which cascades into the first of 13 giant, linked aquariums. You can hop along stepping stones through a pond of super-sized and colorful koi.

Lewis Ginter Botanical Garden blooms year-round and includes more than 40 acres of spectacular plants and a 63-foot-tall domed conservatory housing orchids, exotic plants and changing displays. There are more than a dozen themed gardens that include a Healing Garden, Sunken Garden, Asian Valley and Victorian Garden. During the summer prominent national musicians perform here in a beautiful bloom-filled setting.

The Virginia Fine Arts Museum houses a stunning collection that spans more than 5,000 years and is recognized as one of the top comprehensive art museums in the country. It houses Impressionist and Post-Impressionist works, Paul Mellon’s British Sporting and Contemporary art– Pollock, Rothko, deKooning, Warhol– as well as renowned South Asian, Himalayan and African art. The one of a kind “Maharaja” exhibit explores the extraordinarily rich visual culture of India’s last royal families until August 21. The works of renowned glass artist Dale Chihuly opens October 19. The museum recently opened a new wing, galleries, a three-story atrium, sculpture garden and the sleek upper tier restaurant, Amuse. Be sure to stop by its eclectic gift shop, the stationary and note cards are winners.

Down by the James River the American Civil War Center at Historic Tredegar, an interactive museum, tells the story of the Civil War from three perspectives: that of the Union, the Confederacy, and the slave population. The museum itself is a giant relic, housed in the old 1861 Tredegar Gun Foundry, a major munitions factory during the war.

The Confederate White House served as the official residence of its first and only president, Jefferson Davis, and his family throughout the Civil War. Davis conducted state business, cabinet meetings, military operations and social events in the house where he lived with his wife and three children. Visitors will see the rooms for formal affairs, the family’s private rooms and Jefferson Davis’ office on the second floor. Abraham Lincoln made his way to the Confederate White House and sat in his office chair after the fall of Richmond.

Next door you’ll find The Museum of the Confederacy. It is home to the world’s largest collection of artifacts, manuscripts & images associated with the domestic, military and political life during the period of the Confederacy. In its climate-controlled archives thousands of artifacts are carefully laid out in protective drawers. There are rag dolls and lace finery, folded uniforms scarred by bullet holes and sword slashes, battle flags, well-maintained revolvers and dashing sabers, and  all sorts of belongings of those who gave their lives.

You won’t find a lot of those gory battle field scenes in director Steven Spielberg’s movie on Abraham Lincoln that was filmed in Richmond last autumn. Due to be released in theaters Nov. 9, the much anticipated “Lincoln” is tightly focused on the last four months of Lincoln’s life and the political achievements of that period. The film stars Daniel Day-Lewis as the president and Sally Field as Mary Todd Lincoln. Supporting actors include Tommy Lee Jones, James Spader and David Strathairn. The bright-white Virginia State Capitol with its columned portico– designed by Thomas Jefferson– is the most recognizable site in the movie. 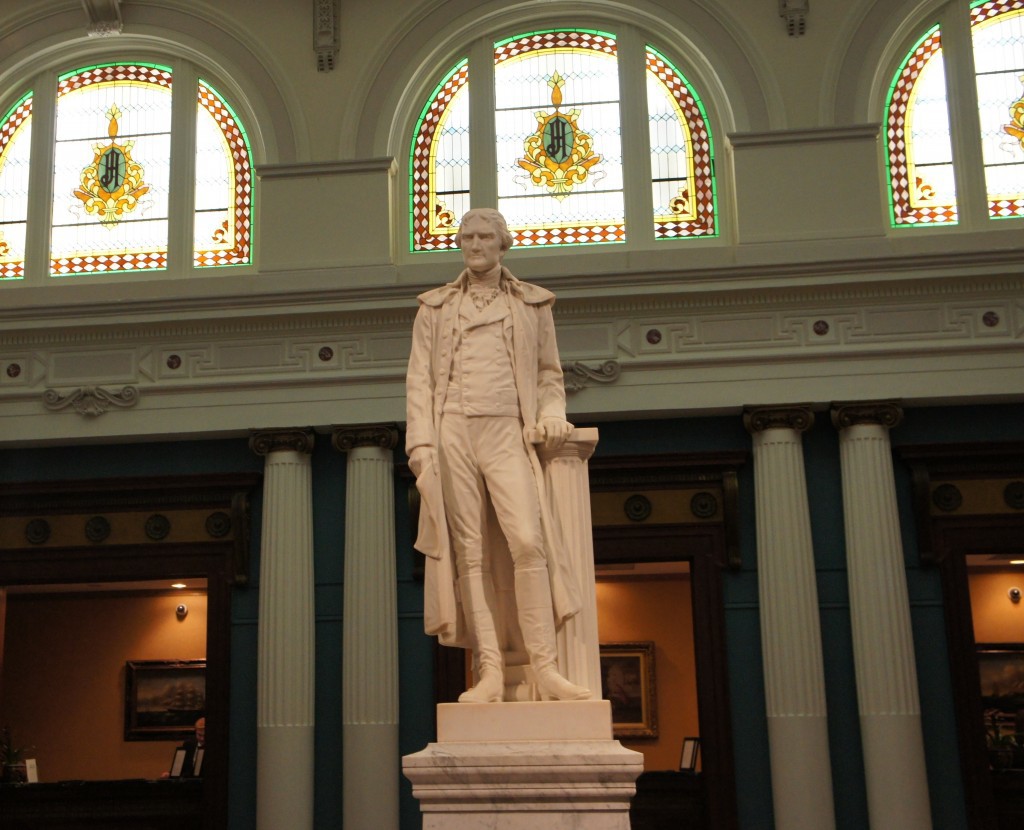 Many of those actors holed up at the Jefferson Hotel, the undisputed grande dame of Richmond that opened its doors in 1895. It’s lost none of its luster. A life-sized Carrara marble statue of Thomas Jefferson stands in the lobby, flanked by faux marble columns, a Tiffany stained-glass skylight and a grand staircase rumored to have been the inspiration for the staircase in “Gone With the Wind.” The rooms are spacious and the service by concierge and hotel staff shines. Jefferson also boasts the restaurant Lemaire that has earned national culinary kudos.

Another popular spot is the Shockhoe Slip Historic District. The name “slip” refers to the canal boat slips nearby where goods were loaded and unloaded. The once-massive tobacco warehouses have been renovated into apartments, boutiques and eateries. With its hardwood floors, exposed brick walls, and natural wood shelves Fountain bookstore is the quintessential independent bookstore. Stop by Urban Farmhouse for breakfast items as well as sandwiches and salads, including winter beet salad with oranges, fennel and mint and the Virginia ham cubano.  Bistro Bobette is chef-owned, an intimate setting. It offers such as classic French fare, crepes, tartines, mussels, steak frites and quiche.

Roosevelt’s is nestled at the end of a row of homes in the nearby gentrified Church Hill section. Time-worn wooden floors, refashioned church pews, a perfect shade of blue on the walls and high a tin-stamped ceilings lend a genteel Southern charm. The ceiling centerpiece is an immense chandelier with black and crystal pendants. 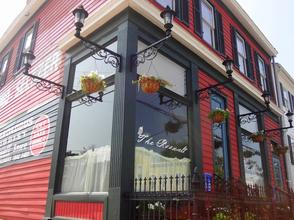 We wandered over to a lively bar that anchors the back of room serving regional craft beers, specialty cocktails and Virginia wines. Barkeep Thomas spun tales of the Lincoln movie actors Sally fields and Tommy Lee Jones frequenting the quaint eatery and the movie crew’s closing dinner. Owners Kendra Feather and Lee Gregory’s menu is less fine dining and more Southern pub fare at reasonable prices. We enjoyed a superb meal of steamed mussels with curry, coconut and lime, peach salad with burrata, and flap steak with homemade A1 and fingerlings. Try their roasted beet and watermelon salad with goat cheese and lemon oil, house puffed smoky pork rinds, or roasted catfish with dirty rice and remoulade.

Roosevelt’s pays respect to the city’s past while boasting a creative and talented chef, yet another tip of the hat to Richmond, and its “New South” makeover.