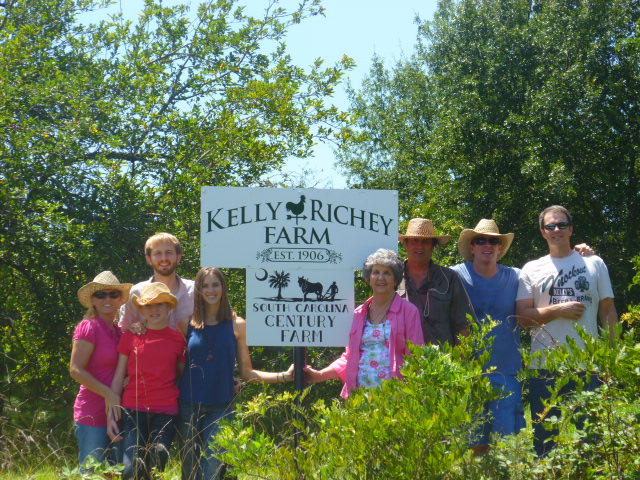 Each year, the organization accepts 10-12 farms into the Century Farms program.  In order to qualify, a portion of the original property must remain intact and the line of family ownership must be unbroken.  Applicants need to furnish copies of original documents such as deeds and wills to qualify. The program is administered by the Pendleton District Historical, Recreational and Tourism Commission with Leslie McCall as the Program Coordinator.

According to McCall, “Century Farms are crucial to our economy in that they both represent where we have come from, in South Carolina, as well as where we are going.  Many of these farms were around when cotton was king, and now they take on a whole new approach, often a sustainable, greener approach.  Many of our Century Farms are on the cutting edge of tomorrow’s agriculture, in that they have embraced sustainable, organic practices on their farms, as well as opening up their operation to the general public, either for tours or on-site markets.  This is the most direct kind of ‘buying local’, and we are proud as a program to be a part of South Carolina’s agricultural heritage, by celebrating the past and promoting the future.”

Denver Downs Farm is a local century farm established in 1869 by the Garrison family. It was originally

farmed for cotton, until right after World War II when T. Ed Garrison, Jr. returned with 10 Jersey cows and began dairy farming.  Eventually the herd grew to about 300 Holstein cows until 1994 when the Garrison family sold the milking cows and changed to farming corn, soybeans, small grains, vegetables and beef cattle. Denver Downs also has a large Farm Market during the warmer months and operates one of the largest Corn Mazes and pumpkin patches in the Southeastern United States. This year’s maze is sponsored by the Greenville Hospital System University Medical Center to commemorate the 100th Anniversary of the Greenville Hospital System.

The Century Farms Program will host an event on January 25, 2013 at Soby’s Restaurant in Greenville to honor the century farmers and sustain awareness of our agriculture heritage in the Upstate.  The guest speaker will be Shaun Garcia, chef at Soby’s, who will speak about connecting farmers and restaurants. This event will be open to the public and more information will be posted soon on the Century Farms Program website.   “Our events and marketing for the programming will be focused on helping connect buyers, such as restaurants, directly to the farmers, by getting them together in a room, discussing options.  To see South Carolina buyers going directly to South Carolina growers…this will be of great benefit to all of us, and we at the Pendleton District Commission are excited to see how far the South Carolina Century Farms Program can go,” says McCall.