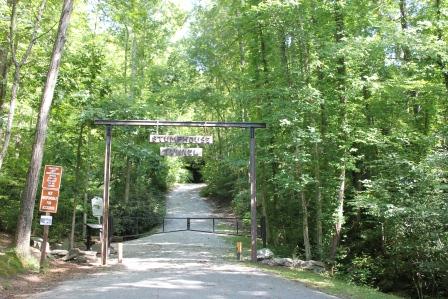 The Upstate is an outdoor lover’s paradise- getting outdoors is what we love to do.

And as the mercury rises- the mountains, with their lush foliage, canopied treetops and plentiful waterfalls beckon.

Our area is home to more waterfalls than anywhere else in the nation. The trail system in the Upstate is also quite extensive with hikes ranging from day hikes, like the ones below, to multi-day hikes along the Foothills and Appalachian trails. So pack a lunch, bring some water and cool down with one of these great summer-time hikes.

This 3.4-mile moderate hiking trail in the Sumter National Forest is beautiful any time of year, but the waterfall at the end of the hike is best after a good rain during the summer. Even when the trail and picnic area are crowded on a nice weekend, the tall pine and hardwood trees make it feel secluded.

There are actually two trails at Yellow Branch. The first is a short nature trail (0.4-mile loop trail), the second the longer out-and-back Yellow Branch Falls Trail. After hiking you can either have lunch in the picnic area near the parking lot or visit nearby Stumphouse Tunnel, a 1,617-foot-long abandoned railroad tunnel that is one of the most visited sites in South Carolina. It’s considered somewhat of an oddity and a monument to pre-Civil War engineering. Issaqueena Falls is a 200-foot cascading waterfall named for a Creek Indian maiden. Both are just up the road, less than a mile from Yellow Branch Falls.

Part of the 11,000-acre Mountain Bridge Wilderness Area, Jones Gap is a peaceful yet popular area due to five waterfalls and numerous trails located in the park. Rainbow Falls has been a favorite hiking destination for years, especially with campers from the nearby YMCA Camp Greenville. There’s even an alternate route to the falls accessed through the campgrounds. Don’t let the short distance on this hike fool you. It’s a very steep elevation change and you will be crawling over boulders. But it’s definitely worth it-the waterfall is the best in South Carolina.

Part of the 11,000-acre Mountain Bridge Wilderness Area, it’s named for the two watersheds that are within its boundaries. Mountain Bridge is considered the best hiking destination in South Carolina as it contains the most extensive trail system in the state. Don’t let the short distance of 1.2 miles at Falls Creek Falls one-way fool you, this is one grueling hike. The almost 600 feet in elevation change is significant and at times you will be climbing up tree roots. But the 100-foot waterfall at the end is spectacular and the mountain views as you climb make it all worthwhile.

This park is considered one of Oconee Counties best kept secrets. Hidden away in Westminster, even some locals don’t know this park exists. This little gem offers waterfalls, sandy beaches for swimming and 4 major sets of rapids for kayaking, canoeing and tubing.  Just off the parking lot is Ramsey Falls, a nice 40-foot waterfall. There are several other waterfalls downstream and Chau Ram features the longest suspension bridge in Oconee County.

In the 1800’s, Native Americans used the rock shoals at Cedar Falls as a hunting campsite and a way to

cross the Reedy River The shoals were also used to power local mills and in the 1820’s to generate electrical power. With reminisces of a small Niagara Falls, the Reedy River widens to over 200-feet here, with water cascading over numerous rocks and boulders.

Today it’s a little-known, local swimming hole, but that’s about to change as the park just received a $2.7 million makeover thanks to funds left over from the cleanup effort of a 1996 oil spill, the largest ever in South Carolina, which dumped more than one million gallons of diesel fuel into the Reedy River.

Cedar Falls is maintained by the Greenville County Recreation District and will eventually include canoe launches, picnic shelters and a fishing pier. There’s a nice partially paved hiking trail already open that runs alongside the waterfall and dam and then along the Reedy River. More trails will be opening in the near future.

Paris Mountain is easily one of Greenville’s greatest assets. The close proximately to downtown Greenville makes this 1,540-acre park a nice family getaway, a place for a Sunday afternoon picnic or in the summer, as an after work retreat.

The park was originally built in the 1930’s by the Civilian Conservation Corps during the Great Depression and there are several hiking trails to choose from. Take the 1.2 mile loop around Lake Placid that is an easy walk or go a little further into the park to Picnic Area Number 6 and follow the Sulphur Springs Trail. This one is a 3.5 mile loop that can get at little steep at times but it’s a great hike as it leads past an old dam and water tower on the shores of Mountain Lake. The park also has picnic tables, canoe, kayak and paddle boat rentals and a swimming area.

A popular local spot for those heading to Table Rock State Park or Caesars Head State Park, Wildcat Branch Falls is one of the smaller waterfalls in South Carolina, but what lacks in size (it’s only about 30-feet high), it makes up for in fury.

There are actually three waterfalls here and all are fed by Wildcat Branch Creek, one the South Saluda River tributaries. Once visitors step out of their car and approach the first of the falls, the sound of the highway evaporates and all that can be heard is the rush of the water falling over the rocks. The first two waterfalls are close to the highway and with no real signage (just follow the trail), most visitors don’t even realize that they can take a moderate 1.0 mile loop trail and see the remains of a house built by the Civilian Conservation Corps and another, taller waterfall.

The location just off State Highway 11 makes Table Rock State Park easy to get to from most of the Upstate and the views of Table Rock Mountain are spectacular. While Table Rock has numerous hiking trails, a favorite is the Carrick Creek Trail.

The trail begins at the Nature Center, across the road from Lake Oolenoy. And, while this trail is only a 1.9 mile loop, it is challenging with sometimes steep elevation changes and several creek crossings.  It follows along Carrick Creek for a good portion of the trail and you’ll pass by several waterfalls as well as crossing over the creek many times. It’s heavily forested and local wildlife such as black bears, deer, turkeys and bobcats have been spotted. Table Rock also offers camping, fishing, boating, picnicking and swimming.