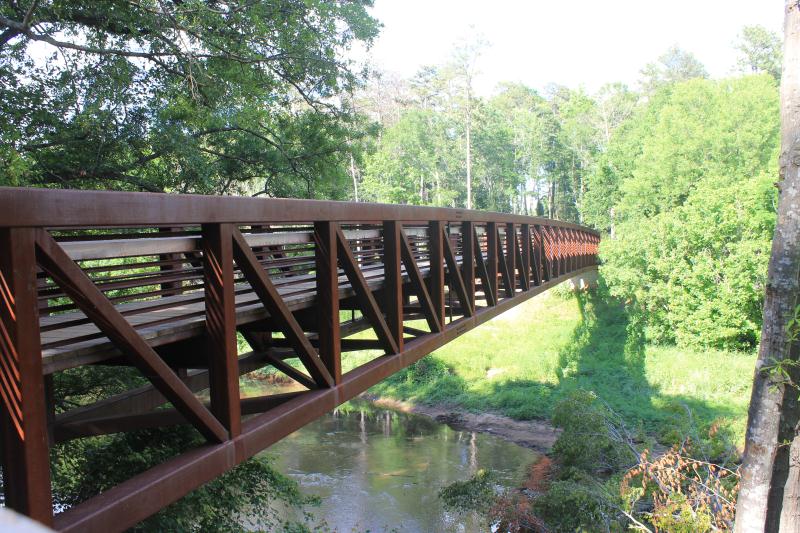 May is an ideal time in the Upstate to get outdoors. Allergy season is winding down, the trees are green, the flowers are blooming and it’s not too hot yet. From a waterfall in our own backyard (almost) to Table Rock Mountain, here are some easy hikes the whole family can enjoy. Also don’t forget to bring your hiking poles.

The shoals at Cedar Falls were used to power local mills and in the 1820’s to generate electrical power, but today it’s a little-known, local swimming hole with cascading waterfalls dumping into numerous pools. 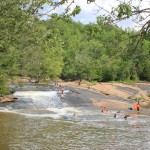 That’s about to change though as the park is getting a $2.7 million makeover thanks to funds left over from the cleanup effort of a 1996 oil spill, the largest ever in South Carolina, which dumped more than one million gallons of diesel fuel into the Reedy River. Cedar Falls is maintained by the Greenville County Recreation District and will include canoe launches, picnic shelters and a fishing pier.  There’s a nice paved hiking trail already open that runs alongside the waterfall and dam. More trails will be opening later in 2011.

How to get there: Located at 201 Cedar Falls Road in Fountain Inn.  Take Fairview Road to Hwy 418 and turn right.  Turn left on Fork Shoals Road and then makes another left on McKelvey Road.  Take a right onto Cedar Falls Road and look for it on the left.

With over 3 miles of natural surface trails and 2 miles of paved trails, this park provides access to many different easy hikes.  Several of the trails traverse through a wetland area and are a great place for bird 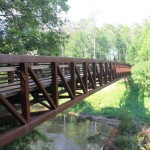 watching.  Boardwalks are built over water covered areas and there is a pedestrian bridge over the Reedy River. There are also observation decks for wildlife viewing. The park has even been designated an Important Bird Area of Global Significance by the National Audubon Society.  Over 170 different species of birds live here including blue herons, loons, egrets, hawks and vultures. The area is also considered the southern hub of the Swamp Rabbit Trail and will eventually be connected with it.

How to get there: There are several different parking areas to reach the trailheads.  The main entrance is located at 840 Mauldin Road at the former Municipal Stadium, across from the FedEx building. Other trailhead locations are: 701 Fork Shoals Road (directly behind the fire station), 601 Fork Shoals Road (at White Horse Road), Henderson Avenue at the junction of Meadors Avenue and One Spanco Drive (just past the Conestee Mill).

Paris Mountain State Park was originally built in the 1930’s by the Civilian Conservation Corps during the Great Depression. There are several trails to choose from.  Take the 1.2 mile loop around Lake Placid that 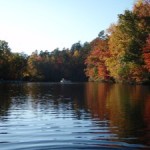 is mostly level and an easy walk or go a little further into the park to Picnic Area Number 6 and follow the Sulphur Springs Trail.  This one is a 3.5 mile loop that can get at little steep at times but it’s a great hike as it leads past an old dam and water tower on the shores of Mountain Lake.  The park also has picnic tables, canoe, kayak and paddle boat rentals and a swimming area.

Wildcat Falls is a popular spot this time of year. It’s one of the smaller waterfalls in South Carolina but what Wildcat Falls lacks in size it makes up for in fury. Once visitors step out of their car and approach the falls, the sound of the highway evaporates and all that can be heard is the rush of the water falling over the rocks. 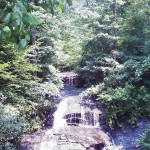 There’s more to see here than the initial waterfall though. Take the unmarked trail up the hill about a quarter of a mile and you’ll see the remnants of a structure built by the Civilian Conservation Corps sometime between 1933 and 1942. Continue up the trail about another half mile through the forest where light barely filters through. Hikers will be walking alongside the stream most of the way. Cross over a small footbridge and discover Wildcat Branch Falls, a 30 foot high spectacular waterfall that cascades down the rocks. Be careful at these falls and don’t climb on the rocks, they are very slippery.

How to get there: Take Highway 276 until it turns into Highway 11 and then drive about half a mile to a pullout on the right side of the road. There are no signs, but when the weather is nice it can be found by the vendors selling hot boiled peanuts.

Table Rock has numerous hiking trails but a favorite is the Carrick Creek Trail.  It’s a 1.8 mile, moderately strenuous trail that offers great views of Table Rock. The trail begins at the Nature Center, across the road 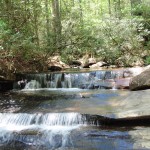 from Lake Oolenoy. The first 100 yards of the trail are paved the pavement ends at a waterfall with a small swimming hole. This is a popular spot for families with small children. After that though the trail becomes more rugged, getting a little steeper as it first follows a stream and alongside several small waterfalls.  It’s heavily forested and local wildlife such as black bears, deers, turkeys and bobcats have been spotted.  Table Rock offers camping, fishing, boating, picnicking and swimming.

Detailed trail maps along with other great hikes in the Upstate can be found at www.sctrails.net.