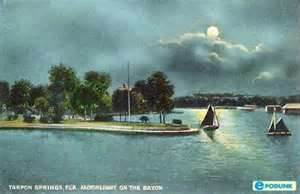 They searched the sea for treasure. But the treasure wasn’t gold or jewels. 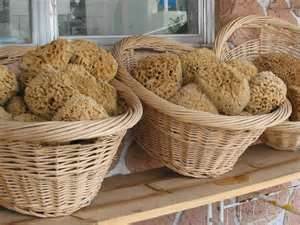 When divers from the Aegean Sea turned up in Tarpon Springs, Florida in the 1890s they came to harvest the rich sponge beds in the Gulf of Mexico.  A bottom-dwelling creature, the sponge attaches itself to something solid in a place where it can, hopefully, receive enough food to grow.

Greek immigrants made the city home.  Carrying a short rake to hook sponges, divers wore a 177-pound diving suit topped by a bell-shaped copper helmet and air hose that allowed them to dive in 36-foot deep water for a couple of hours. Using diving and hooking, the Greeks harvested four times the quantity and often better quality sponges— revolutionizing the sponge industry.

After a dive and a catch, the men headed back to port. Sponges were cleaned and measured and price haggling erupted at the Sponge Exchange. The divers were paid according to the number of sponges they were able to harvest. As news of the industry grew, people began turning up at the local docks to see the bounty of sponges, the beginning of the area’s tourist industry.

The part of the sponge we use is essentially a skeleton, which is covered by a tough skin in the sea. The 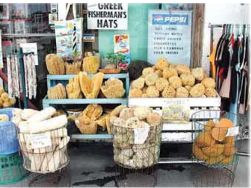 shops in this seaside town offer a bounty of varieties, from giant sea wool sponges (great for car washing) to skinny finger sponges to finer and softer sea silk (good for the face). The industry was nearly wiped out in the 1940s when a red tide destroyed the beds off Florida’s coast and then later the introduction of synthetic sponges. It exists today, but on a much smaller scale.

Named for the tarpon fish plentiful along the Florida’s Gulf coast, it is located thirty miles northwest of St. Petersburg. The seaside village was developed in the 1880s as a winter resort for wealthy Northerners who built stately Victorian mansions there.  Today, Tarpon Springs (pop. 20,000) is mostly known for its $20 million tourism industry spotlighting sponge diving and the local Greek color.

Here the smell of gyros and baklava fills the air. The local color scheme– pale blue on brilliant white– comes straight from the flag of the old country. Visitors will find plenty of sponge related activities here– diving exhibitions, the local museum and a deep-sea fishing boat where you can see sponge divers at work.  Many of the older Greek divers are still available to talk to tourists in the community’s shops that blanket the old waterfront area and a number of sight-seeing, charter fishing, and deep-sea fishing boats operate from the docks along the Anclote River. 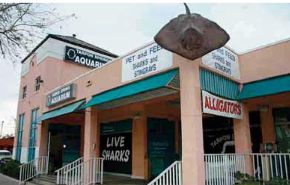 The Spring Bayou Inn is a sprawling, comfortable home built around the turn of the 20th century, unique in architectural detail. Guests may relax in their rooms, the parlor complete with baby grand piano, or on the spacious wraparound front porch.

Stroll along Dodecanese Blvd., the main waterfront street and browse the shops and enjoy the Greek cuisine at any of the many Greek restaurants and pastry shops. Stop by the family owned and operated Mykonos restaurant. Treat yourself to such authentic delicacies such as soutzoukakia (ground beef and herbs, charbroiled on a skewer), taramosalata (fresh caviar spread), and patatokeftedes (pan-fried potato patties). And don’t forget the delicious Greek village bread and pastries from the Mykonos bakery.

Over at the Opa Café just off Main Street, plates of spanakopita (spinach pie in filo dough) and mousaka are served. The Riverside Grille House is celebrated for its curved archways and magnificent view of the Anclote River where patrons rave about the pastitsio (ground beef, pasta, onions and Kefalotyri cheese) and the waterfront view.

Bike, jog, skate or hike along the Pinellas Trail that weaves its way through the town extending 38 miles to St. Petersburg. The Fred Howard Park, west of Florida Avenue, is a mile-long causeway that connects the mainland part of the 150-acre park with the beach area.

Each January a visiting Greek Orthodox archbishop tosses a crucifix into Spring Bayou where boys dive into the cool water from small boats to retrieve the cross.  The lucky boy who retrieves the cross receives an extra blessing and a year of good luck.