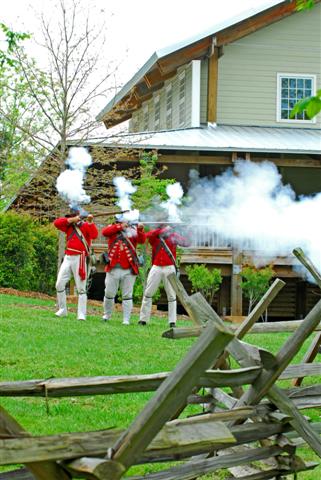 The battle that took place at Musgrove Mill on August 19, 1780 was a short (about 30 minutes) but very bloody battle. In fact, Isaac Shelby, a Colonel that fought both at Musgrove Mill and Kings Mountain stated in his memoirs that the battle at Musgrove Mill was the fiercest battle in which he ever fought. The brief battle was between a small detachment of Colonial Patriots against a larger group of British Loyalists.  But despite the odds, the Patriots were victorious and the battle was considered an important turning point in the war. 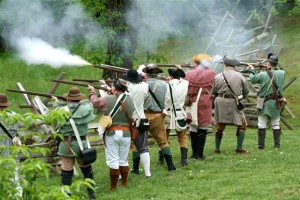 The Musgrove Mill site contains a portion of the battlefield as well as the colonial home and mill sites of Edward Musgrove.  Musgrove was a miller, farmer, road manager and land surveyor. He built his home along the Enoree River in the 1770s.  In the summer of 1780 the war came to his doorstep.

Edward Musgrove himself didn’t fight in the war.  At the time of the war he was considered a fairly aged man, about 64 years old, and probably didn’t want to have any part in the skirmish.  But, his home and land was used as a British encampment and his grist mill provided a source of food for the soldiers. There have been rumors that his daughter, Mary Musgrove, was a spy for the Patriots and would listen in on the British camped on her father’s land and then run to the Patriots camp to relay their plans.  This was never proven though and there is some speculation that the rumors actually come from a character in a novel called Horseshoe Robinson: A Tale of the Tory Ascendancy published in 1835. 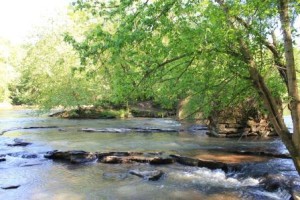 The Musgrove Mill visitors’ center houses exhibits on the battle and some history of the American Revolution.  It’s a good place to stop in, pick up a map and get familiar with the park. Be sure to plan enough time to hike their two separate interpretive trails. According to Park Manager, Brian Robson, the two trails are nothing alike; “you almost couldn’t get two different trails.”  The British Camp Trail is a one-mile leisurely trail that starts at the Visitors Center parking lot and winds along the Enoree River. It offers views of where the old mill and home site used to be which unfortunately washed away in 1852.  The Battlefield Trail at Horseshoe Falls is about 1.3 miles and is a little more challenging but takes you along an ancient gully and features sites where the battle actually took place. 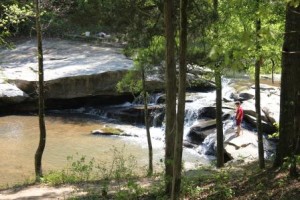 Eventually, plans call for a bridge over the Enoree River to link Horseshoe Falls and the rest of the park, but for now, you have to drive a couple of miles down the road from the visitors center to get to the Horseshoe Falls area. There is parking available and the pathway to the waterfall is paved. The pool at the base of the small waterfall is a popular swimming hole typically filled with kids throughout the late spring and summer. From here you can hike along the Battlefield Trail, an interpretive trail that has informational signage which explains the battle as you hike along. 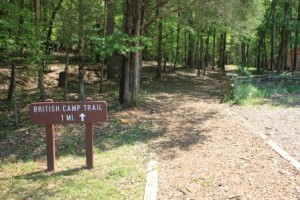 Each spring, Musgrove Mill holds a Living History Festival.  This year it is will be held Saturday, April 21, 2012 from 10:00 a.m. until 4:00 p.m. While entrance to the park is normally free, there is a small charge during this event.  Admission is $2.00 for Adults (ages 16-64), $1.00 for seniors (ages 65 +) and children under 15 are free. The event allows visitors to experience what life was like during the Revolutionary War.  It features re-enactors that will be doing weapons and tactical demonstrations, blacksmithing, candle-making and other period crafts.  Also, because Edward Musgrove was a Surveyor, there will be demonstrations on Colonial Surveying that will show how land was surveyed using chains before we had the high-tech gadgets that we now rely on.  Park employee Dawn Weaver will be showing kids how to play colonial games like hoop races. Prizes will be given out and the kids will also be able to play with wooden muskets.

Also, according to Brian Robson, Musgrove Mill “has the only canoe and kayak launch on the Enoree River” and while they don’t rent equipment, there is a small put-in area available.  Other park amenities include fishing, picnic shelters and restrooms.

The park sponsors many other programs throughout the rest of the year. In October they host a Living History Campout which allows 20 campers the opportunity to stay overnight and relive colonial times. Camping spots go very quickly for this popular event.

Musgrove Mill is open from 9:00 a.m. until 6:00 p.m. daily. It is located in Clinton on Highway 56. For exact directions and more information, please visit their website at http://www.southcarolinaparks.com/musgrovemill/introduction.aspx.