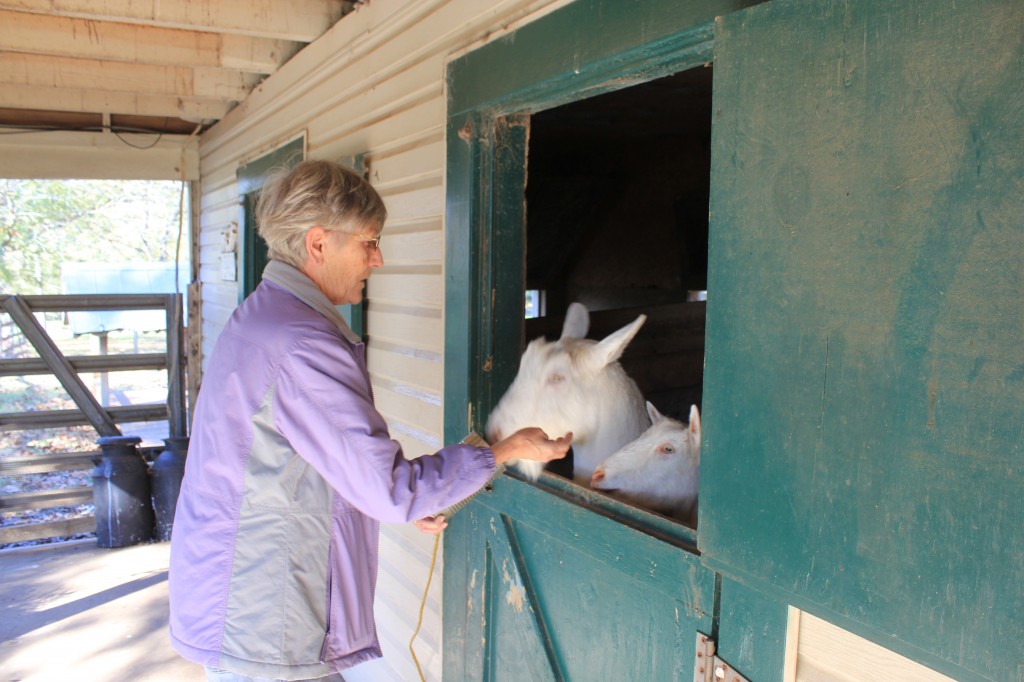 Goats and trains and the Revolutionary War all come together in this city “where there’s always something blooming.”  Located on the shores of Lake Greenwood, the 11,400 acre lake is obviously a big attraction but there’s more here than just the water. Uptown Greenwood has a revamped downtown area with “the widest main street in the world” and is home to great museums, an old-fashioned drive-in movie theater and an amazing goat farm.

which has had several purposes since 1905, including housing the IRS, post office and social security offices. Today it serves not only the regional visitor’s center but also as the Arts Center of Greenwood County. Featured are works of art by local, regional and national artists with receptions held on the first Friday of each month. There are four artists-in-residence including Jeffrey Callaham who is known as the story-telling artist as he tells real life stories through his paintings and John Holloway a local photographer.

Be sure to go next door to The Museum. This well-laid out museum displays around 45,000 objects from across the Greenwood area showcasing Greenwood’s cultural and natural history. There’s also a replica of a 1900s main street with peeks into shops and rooms just as they would have looked at the turn of the century. Also part of the museum, a couple of blocks away, is the Railroad Historical Center. Here you’ll find an old steam locomotive dating back to the 18th century along with other railroad artifacts.

Trains and goats might seem a weird combination, but they comes together beautifully at Emerald Farm. This working goat farm is home to about 12 Saanen goats (a type of Swiss dairy goat), 2 llamas and a multitude of peacocks, rabbits and wild turkeys. Owners Kathryn and Paul Zahn have had goats for over thirty years and also take in occasional rescue ducks, carp and catfish to hang out in their onsite pond. Kathryn, who started her career working at Clemson, is certified in natural health and makes and sells soaps, shampoos and lotions from the milk her goats provide.

where members can bring in their own trains and run them anytime they want. Club dues are only $10.00 per month with storage space available. The train layouts began in 1997 and have evolved continuously over time. Also on the farm are a fifty-five year old CSX hydraulic train and a newly restored 1956 Santa Fe and tours are given around the property on a vintage 1957 train. In the gift and hobby shop you can pick up model train parts, local artwork and also supplies to make your own wine, cheese, beer and mead.

No visit to this area is complete without a stop at The Ninety Six National Historic Site. In the mid-1700s, European colonists settled in the area and Fort Ninety Six was built to protect the settlers from Indian attacks. During the Revolutionary War, this was considered a strategic location and the first land battle south of New England was fought here in 1775.  Nathaniel Greene also staged the longest field siege of the Revolutionary War here in 1781. The British-built Star Fort is considered one of the most well-preserved forts of the 18th century. The park covers 1022 acres and has several trails including a one mile hiking trail that lets visitors explore the Star Fort and historic roadbeds. On February 2nd and 3rd the park will feature a French and Indian War Provincial Encampment. In honor of the February 3, 1760 attack on Fort Ninety Six, living historians will interpret life as provincial soldiers.

If all of that has made you hungry, grab a sandwich at Howard’s on Main. This local delicatessen, owned by Greenwood native Howard Corley, serves up heaping sandwiches, wraps and Panini’s. Howard has owned other businesses in Greenwood but this is his first venture in Greenwood’s Uptown area. Howard’s on Main also offers a small bar in the back in case you need an adult beverage.

Kicker’s is another local favorite and is open for lunch daily (except for Sunday) but only open for dinner Thursday, Friday and Saturday. Opened in 2004 by owners Abdel and Andrea Dimiati, they offer regular items such as hamburgers, wraps and pasta but with a kick. Try the Cuban Burger with Mojo Sauce or a bowl of potato and beer cheese soup.

If you happen to visit on the weekend during the warmer months be sure to catch a movie at the Auto Drive-In Theater. One of the few remaining and operating drive-in theaters in South Carolina, the Auto Drive In shows first-run movies, often double and triple features.  Movies start at sundown. Be sure to bring some lawn chairs and a blanket and kick back and relax and enjoy the show.

According to Kelly McWhorter, Executive Director, Greenwood Regional Tourism and Visitors Bureau, “Thanks to the progressive vision of Greenwood’s leadership, the community has now become a regional hub that offers something for everyone including arts and culture, history, recreation, golf, as well as unique shopping and dining. Its small town charm is ever present and welcoming to those who visit!”

So take a drive down the country roads and immerse yourself in history and nature and see for yourself that there “is always something blooming in Greenwood.”