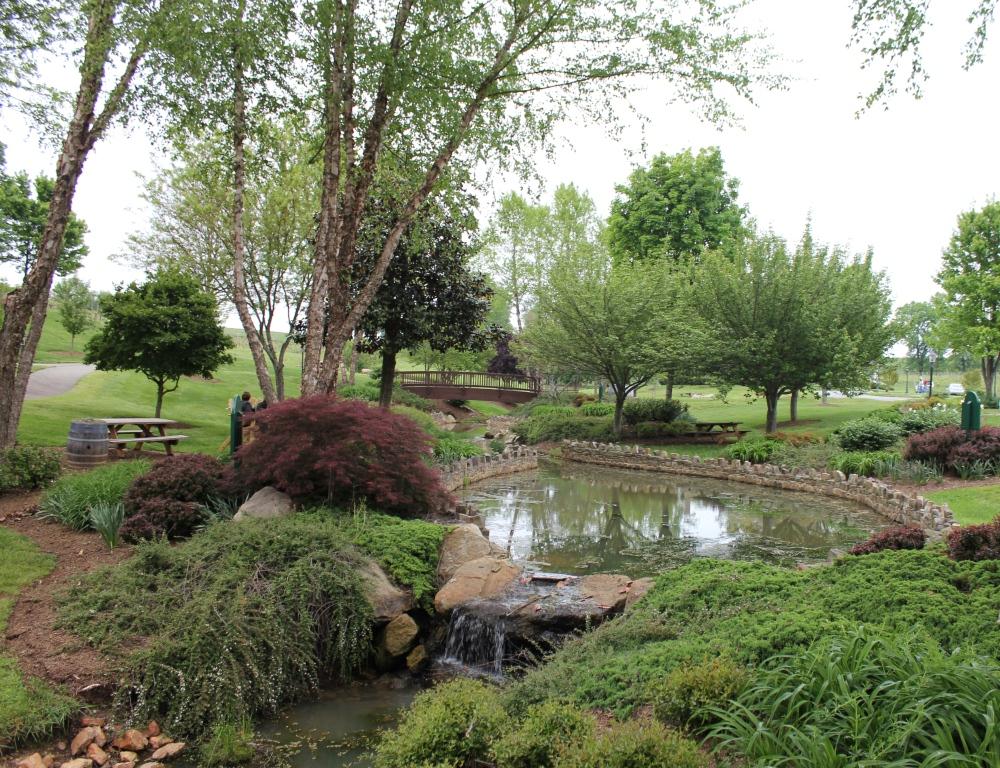 While Napa Valley in California may seem to get all of the attention, the Yadkin Valley in North Carolina is steadily gaining accolades thanks to a robust Viticulture program at the Surry County Community College and the fact that they are churning out some mighty fine tasting wines.

I am not a wine connoisseur by any means and I had heard that wines in the South weren’t that good and were mostly made from Muscadine grapes.  But the 36 plus wineries in the Yadkin Valley are producing great-tasting, award-winning wines from a surprisingly large variety of grapes.

The Viticulture program at the Surry County Community College sets the stage and is the entry point for many winemakers in the area.  The program began in 2004 and has had about 25 graduates in the past five years, most who have gone on to run their own vineyard in the area.  There’s a bonded winery and vineyard on campus and program participants learn the grittiness of the job, including getting up at 4 a.m. to check the grapes and the never-ending process of growing, bottling and marketing their products. 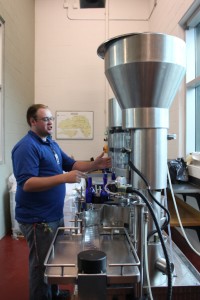 Here’s a look at some of the Yadkin Valley Wineries and what makes them unique.

Open since 2010, this winery has the hilliest vineyard in the Yadkin Valley. New owners Louis Jeroslow, his wife Carrie and Nick White and his wife Jennifer all met while working for the Blue Man Group in Las Vegas. The two couples fell in love with the area when the Whites were married at the winery in 2008.  The property contains a mill (circa 1896) which still has all of the original mill equipment and is where the Jeroslows and White’s live. Nick, who took online viticulture classes from Surry Community College while in Vegas, has gone from drummer to vineyard manager. Jennifer, the head stage manager, now stages weddings and special events. Louis, a special effects engineer and amateur winemaker, is now a professional winemaker, while Carrie, resident director in Vegas, directs a lot of operations and handles wellness and her ministry duties. “We all bring specific talents and skills that fit really well,” Jennifer White said. “We worked together through Blue Man Group for so long that we developed skills about teamwork and communication. It’s a pretty incredible team.”

This winery is set on what was a family hunting retreat in the 1920’s for the Chatham and Haynes manufacturing families and was where they would bring their corporate guests to wine and dine them.  The Chatham family later founded Klondike Dairy and they claimed to have the sweetest chocolate milk anywhere.  There are 3 cabins onsite along with the original hunting lodge that are available to rent.  The eight-acre property also has a pond and a dam that is a mini replica of the Hoover Dam and generates electricity for the property. The winery is located in what was an old barn on property and they maintain the farm-like atmosphere by bottling all of their table wines in Italian milk bottles. 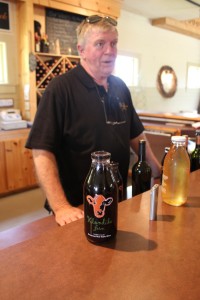 In addition to being a winery, McRitchie is the only cidery in North Carolina. Patricia and her husband Sean have planted over twenty-two varieties of apples they will use to produce their hard ciders. Sean’s father was a winemaker in California and Oregon and Sean had worked in wineries and vineyards in the Willamette Valley of Oregon and all over the world including Alsace Lorraine, Napa Valley, and Australia before opening his own winery in 2006. McRitchie is also the only vineyard that has old English sheep that they use to manage the grass on the back portion of their land.

Located in downtown, historic Elkin, the winery is housed in what was the Elkin Canning Company in the early 1900’s. Owners Matthew and Ann Mayberry have been married for 63 years and like to experiment with their wines. They have made a raspberry wine and a blackberry wine.  Their Bugaboo Creek Red is named after the revolutionary war battles at Cowpens and Kings Mountain and “was our best wine until we made the one after it”, says Matthew. 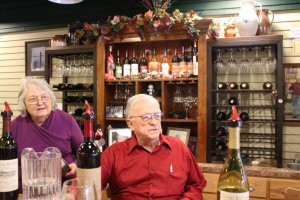 Stony Knoll’s vineyards were planted in 2001 but this 116 year old family property used to be a working tobacco farm. The farm has been in owners Kathy and Van Coe’s family since 1896.  Now, they produce “Some of the best wines in the world on the best property,” according to Van. The tobacco history of the property actually creates a great soil profile in which to plant grapes as farmers plowed the land for years and created great topsoil with lots of nutrients.  They have planted Cabernet Savignon, Cabernet Franc, Chardonnay and Syrah grapes for their wines.

Located on Main Street in downtown Mount Airy this “haunted” winery, deli and brewery is located in an old mercantile building where legend has it that due to a disagreement with Prather, the owner of the neighboring general store set off dynamite charges along the store front in 1926. The store façade was completely destroyed and Belk’s Department Stores purchased the distressed building and rebuilt the storefront remaining here till 1969. During the reconstruction, the skeletal remains of an arm were found. Still to this day no one knows to whom the arm belongs. The staff of Old North State Winery noticed mysterious events inside the building. Reports of walking on the hardwood floors, closing doors, shuffling feet, shadows of movement and the feeling of not being alone when alone are abundant. The Old North State staff decided to dedicate a wine to this wandering sleepless spirit called Restless Soul. 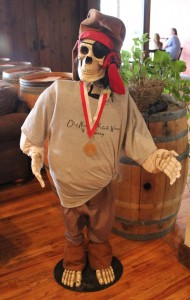 Acreage-wise this is one of the bigger vineyards with over thirty acres and ten different varieties of grapes.  The property is very pet friendly, as most vineyards are, but they go a step further with a fenced in area where Fido can roam. They are best known for their red wines and are one of the few wineries in North Carolina that produces a Sangiovese.  Their large outdoor deck is the perfect place to hang out on a Saturday afternoon.  They also do a lot of outdoor weddings and have a neighbor with Clydesdale horses that can pull a carriage through the vineyard.

This is the first USDA-Certified organic winery and vineyard in North Carolina.  Clyde and Pat Colwell wanted to do something active in retirement with a more sustainable, less carbon footprint. So in 2005 they decided to pursue Clyde’s life-long dream of establishing his own vineyard and winery and make it eco-friendly. The house and wine tasting room are solar powered and Clyde experiments with different animals such as Guinea Pigs to assist with bugs and weeds in the vineyards.  Most of their grapes are native to the region and they use several Muscadine varieties. They are working on planting an Isabella Grape which was used in the 1800’s near Charleston, South Carolina to make a new table wine label.
Shelton Vineyards

The “granddaddy” of the vineyards, Shelton has over 400 acres making it the largest vineyard in North Carolina. Brothers Ed and Charlie Shelton not only own and operate the vineyard together but they also both have houses and live on the property. This was originally a business to run while “retired” but these brothers can’t do anything on a small scale.  They purchased the winery at an auction in 1994.  They harvest grapes by hand, use a windmill to help ward off frost, have a waterfall in the barrel room to keep the humidity correct and plant rose bushes at the end of each vine row to alert them to any possible disease or problem with the grapes (the theory is that the rose bush is more delicate and will be affected first). There’s an inn, two restaurants and several walking paths. 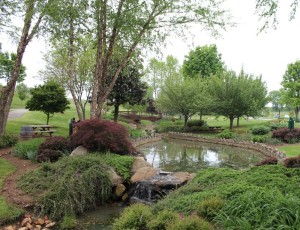 All wineries in the Yadkin Valley have tasting rooms and tasting hours available.  Most have special events throughout the year-some with summer concert series, others with fall hayrides.  For more information, visit http://www.verysurry.com/.