Charlottesville, VA: Life in a Garden of Eden 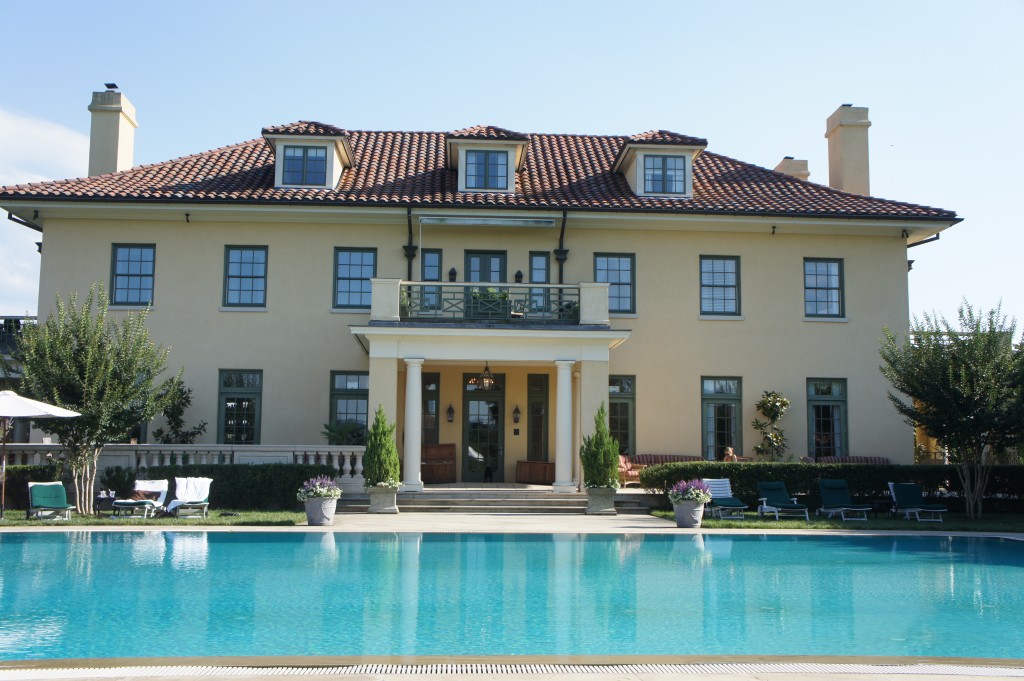 George Washington may be the father of our country, but surely Thomas Jefferson was the smartest guy in the room. Travel to Charlottesville, Virginia and you will see why.

Tucked into the foothills of Blue Ridge Mountains, Charlottesville is best known as the home of the University of Virginia which Jefferson founded and was the principal architect.  Sit on the northern end of the emerald green front lawn and you can marvel at the perfect symmetry of the Rotunda that is based on the Pantheon in Rome. 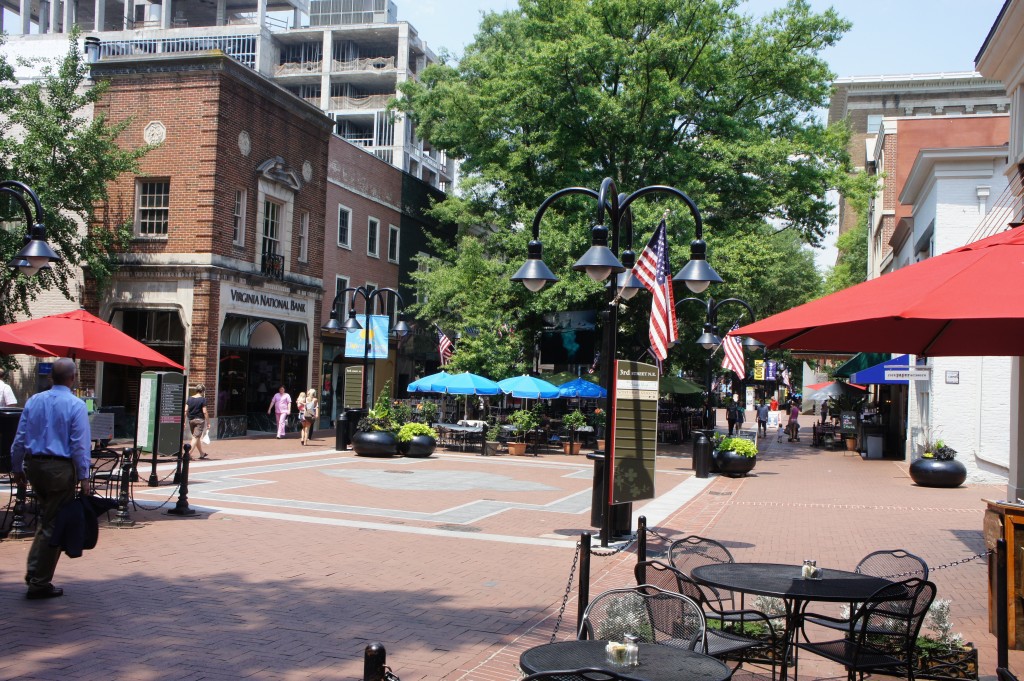 Celebrated for its charm and the beauty of the surrounding countryside, this small town (pop. 45,000) possesses a distinctive cutting edge.   Its bricked bustling pedestrian mall is lined with oak trees and is packed with shops, galleries, restaurants and bookstores galore.

“C’ville” also boasts an extraordinary number of good restaurants where ambitious local chefs update traditional Southern food by uniting it with French, Asian and other influences. Just beyond downtown is The Boars Head Inn, a classic country resort that offers a sophisticated dining twist on local favorites like their zesty peanut soup concocted with coconut milk.

Back in the 1980s Dave Matthews tended bar on the mall at Miller’s, a converted drugstore, before making it big and launching the modern roots-rock wave. Today, the historic Paramount Theater, the Jefferson Theatre and the outdoor Pavilion are top-notch performing arts centers. A book-loving town, thousands attend the annual Festival of the Book in March, and several well-known authors, including John Grisham, Tami Hoag and Rita Mae Brown, live on bucolic estates in the surrounding horse country of Albemarle County.

It was in those rolling hills that Thomas Jefferson built his famous mountaintop home, Monticello. A master politician and America’s third president, he was truly a Renaissance man– a brilliant scholar, inventor, naturalist, and architect. Jefferson played the violin, spoke six languages, assembled a 10,000-book library and his writing talent produced the historic Declaration of Independence. He doubled the size of America through the Louisiana Purchase, and engineered the Lewis and Clark expedition, and the settling of the West. (Captain Meriwether Lewis hailed from Charlottesville).

More than any other powerful early American, Jefferson recognized that the genius of the new nation lay in discovering the undiscovered and seeking the unknown. A self-taught architect with a keen interest in classical studies, Jefferson designed and redesigned and built and rebuilt for more than forty years.  The 21-room, Roman neo-classical Monticello was a 19th-century marvel, with skylights, great expanses of glass, open-air living spaces, and many clever conveniences. Monticello remained Jefferson’s masterpiece home for 56 years until his death on July 4, 1826. 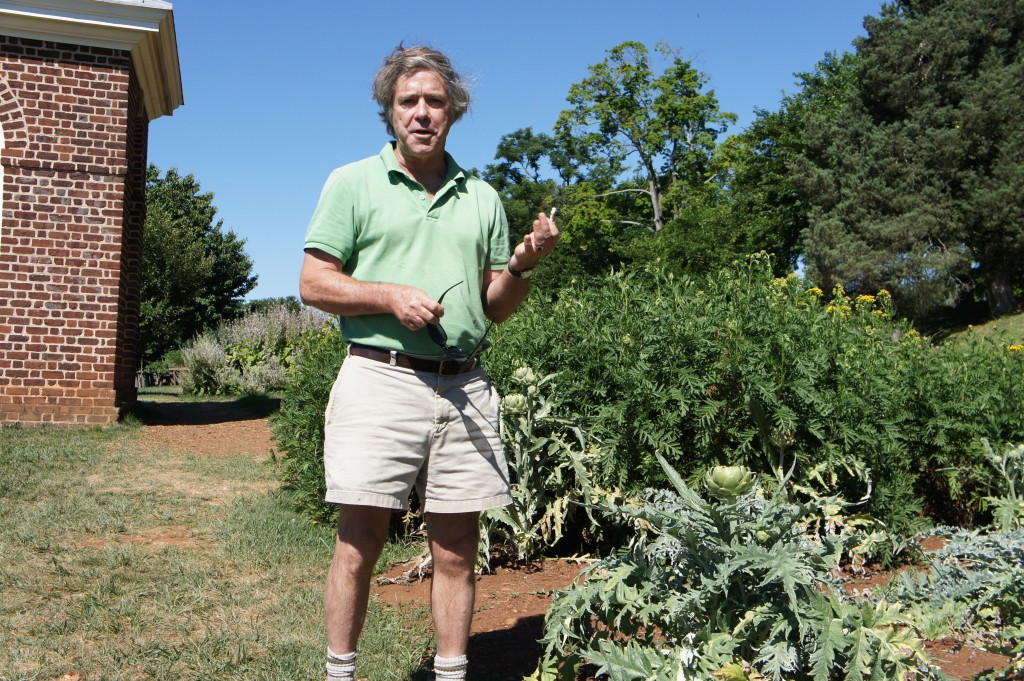 Its gardens were a botanic showpiece, a source of food, and an experimental laboratory of ornamental and useful plants from around the world. When Peter Hatch turned up there in the late 1970s he spied a mish-mash of roses, zinnias and peonies. Digging in the earth, digging for the past, over the past three decades Hatch has meticulously restored Jefferson’s garden design and vision.

“Jefferson was almost obsessive in his attention to detail, he wasn’t interested in a tidy garden. He was all about sowing and harvesting, a truly pragmatic garden,” noted Hatch, Monticello’s director of gardens and grounds and author of a new book on Jefferson’s garden, “A Rich Spot of Earth.”

“His interest in gardening really rose from this truly wide-eyed curiosity about the natural world.  Even at the age of 83, he was playing this self-described role of being an old man, but a young gardener.”

The secrets of Jefferson’s garden lay buried in the ground, sometimes under pavement, as well as in his Garden Journal. Hatch and a team of restorers began prying up the ground on the south side of the estate which was home to the 1,000-foot-long terraced vegetable garden, where Jefferson assembled plants and vegetables from all over the world. 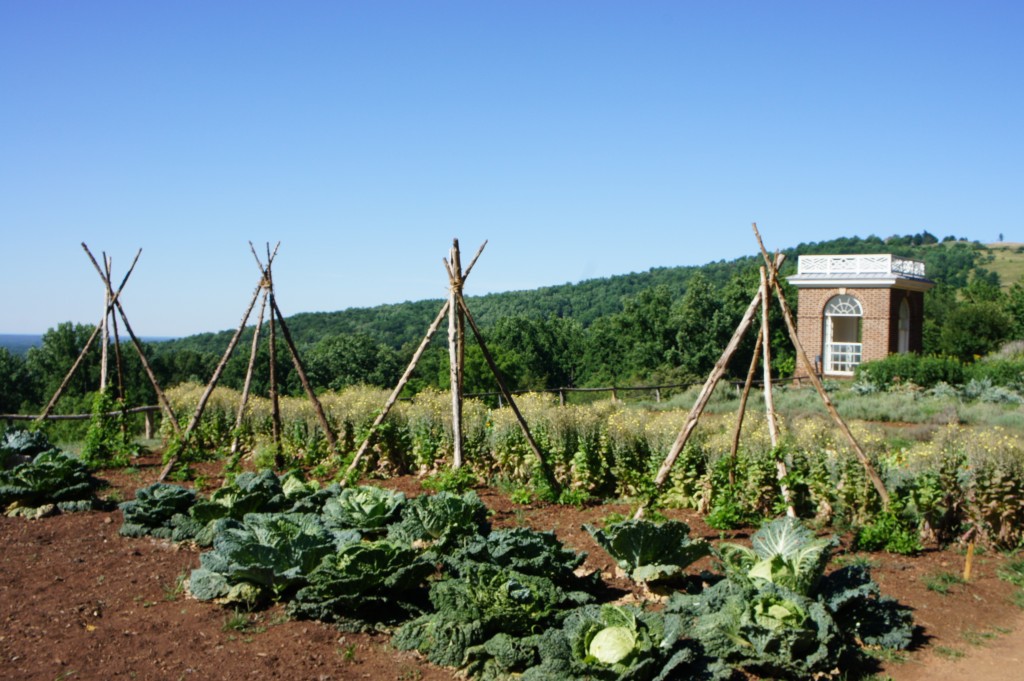 The main part of the two-acre garden is divided into twenty-four “squares,” or growing plots that  were arranged according to which part of the plant was being harvested — “fruits” (tomatoes, beans), “roots” (beets, carrots), or “leaves” (lettuce, cabbage). Jefferson used the northwest border to plant peas very early in the season.  It should have provided a clear advantage in the annual neighborhood pea contest — whoever brought the first English pea to table would host a dinner that included the winning dish of peas.

Perched atop the wall, at the half-way point of the garden, is the pavilion with its double-sash windows, Chinese railing, and pyramidal roof. The pavilion was used by Jefferson as a quiet retreat where he could read in the evening. It was reputedly blown down in a violent wind storm in the late 1820’s. The pavilion was reconstructed in 1984 based on Jefferson’s notes and archaeological excavations. It overlooks an eight-acre orchard of 300 trees, a vineyard, and Monticello’s berry squares, which are plots of figs, currants, gooseberries, and raspberries.

Later in his life Jefferson envisioned vineyards and wines from his native state standing shoulder to shoulder with the great wines of the Old World.  He planted his vineyards close to home, but his efforts were in vain, and his vision remained unfulfilled.

Some 200 years later, Virginia is the fifth largest producer of wine in the United States. The Monticello American Viticultural Area comprises a third of the state’s vineyard acres and much of its most desirable terroire. Stop by the tasting rooms— many featuring Viognier and Cab Franc at the Jefferson, Keswick, Trump and the Dave Matthews-owned Blenheim wineries.

A mile from Monticello we lunched at the circa 1784 Michie (pronounced “Mickie” by the locals) Tavern, the sort of place where Jefferson would have met with his neighbor, James Monroe, to discuss farming and affairs of state over a hearty midday meal. Monroe’s simple family farmhouse, Ash Lawn-Highland, is just down the road. 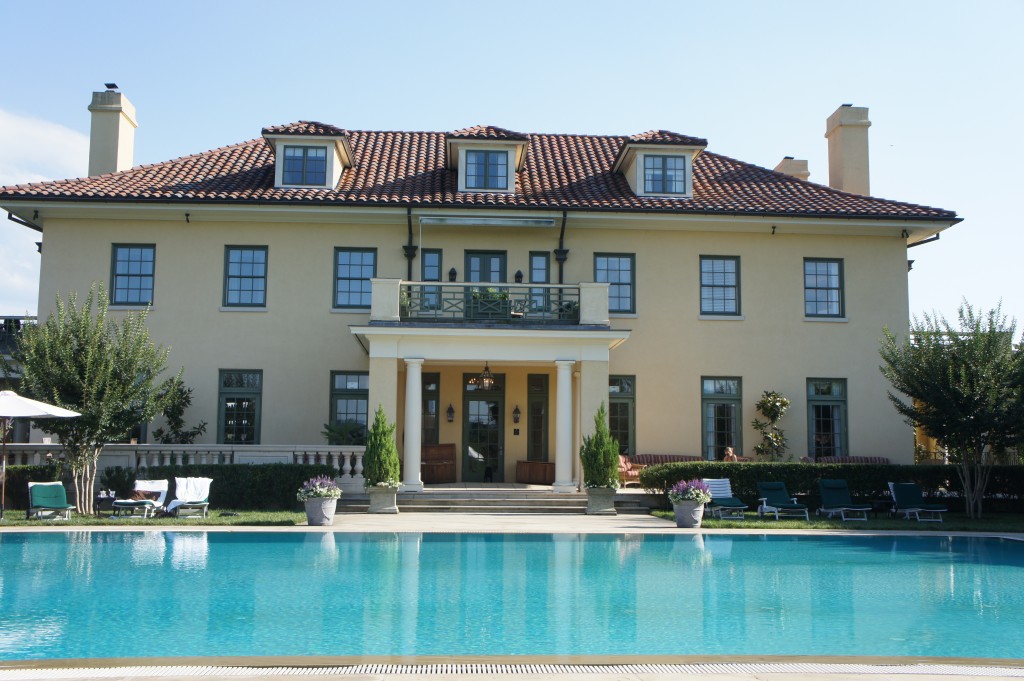 A short drive away up and down the twisty roads brings visitors to Keswick Hall, located on a 600-acre country estate.  Formerly known as the Villa Crawford, it is a stately Tuscan-style structure originally built in 1912 that blends the eclectic design tradition of an English country house with the warm informality of American hospitality at its best. Public areas have overstuffed furniture with fringe and tassels, tables stacked with art books, and apple-filled porcelain bowls.

There are 48 guest quarters– no two are alike. The preferred State Rooms offer more spacious sitting areas particularly those that open onto balconies overlooking the golf course. Rooms are decorated with a mix of English and early American antiques, porcelain and original works of art, canopy beds, polished armoires, and Chippendale chairs. There are hints of fun: one room holds a framed collection of Best in Show ribbons that somebody’s poodle won years ago.

The Fossett’s U-shaped bar is a convivial spot to make new acquaintances. The adjacent private Keswick Club offers a wide range of leisure facilities, including a spectacular 80-foot infinity pool that overlooks a stunning Arnold Palmer-designed golf course complemented by tennis courts, and a health and fitness spa with an indoor/outdoor pool.

Just another slice of this opulent region framed by the fabled Blue Ridge Mountains that Jefferson often described as the “Eden of the United States.” Old Tom got it right.