Check out Louisiana’s Other Side in Shreveport and Bossier City 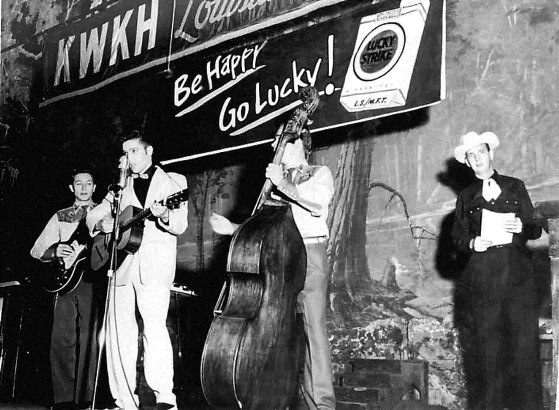 When most people think of Louisiana, they think immediately of New Orleans. Sure, there’s a certain draw to the city of Hurricane’s and Bourbon Street but on a recent trip to LA’s “Other Side”, I found out that this state has much more to offer. Once known more for its river boat casinos than anything else, Shreveport–Bossier City is no longer a seedy gambling place. Today, as the reports on sites like www.boomtownbingo.com/tasty-bingo-review/ describe,  the city has changed from a gambling focus to a thriving downtown, progressive arts and film venues and outstanding cuisine.
Beignets and Bloody Marys’
You’re in Louisiana so it’s necessary to experience local cuisine and there’s nothing more local than Louisiana’s state doughnut. Yes, Café du Monde in New Orleans may have made the tasty treats famous, but the ones at Marilyn’s Place on Fern Avenue, have them beat hands down. They’re “little pillows of heaven” with just the right amount of powdered sugar (lots) and deep fried to a light golden brown. Add in the make your own custom Bloody Mary bar on Sundays, local music and band, and this converted garage is the happening place in Shreveport and a great place to kick back and relax.
The Next Hollywood?
Shreveport doesn’t seem a likely location to be cranking out big Hollywood blockbusters, but it is. The city started putting together attractive packages for filming and the movie studios began to notice. Now with movies such as the Mechanic, Drive Angry and Season of the Witch, as well as HBO’s popular
True Blood series filmed here it’s garnered national attention in the film industry. There are even several animation studios here. Local studio, Moonbot Studios, just won the academy award for best animated short film. Stroll downtown and you’re just as likely to run into a celebrity such as Nicolas Cage or Catherine Zeta-Jones as you are in Hollywood. As you’re sightseeing be on the lookout for locations such as the Louisiana State Fairgrounds pictured in Drive Angry or any number of buildings, streets and landscapes in both Shreveport and Bossier City that you may recognize from your favorite movie.

To get into the Mardi Gras spirit, even if it’s not close to Fat Tuesday, head on over to Tubbs Hardware on Benton Road in Bossier City. An unlikely mish-mash of hardware store, 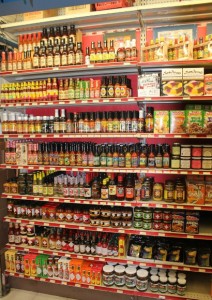 Mardi Gras beads and Hot Sauce, Tubb’s somehow makes it work. This family store first opened in 1922 and current owner Don Tubbs started working at the store when he was twelve years old. When Mardi Gras became popular again in the Shreveport-Bossier City area, Don had the idea to integrate Mardi Gras accessories into the store. Now, people are just as likely to come in for their king cake (they sell over 6,000 each year) and beads as they are for a hammer and nails.

Catch a flick at the Robinson Film Center

This non-profit film center is housed in what was an old dried goods store on Texas Street in downtown Shreveport. Their mission is to provide a venue in Shreveport for independent, international and classical films. There are two theaters with comfy leather seats and a great bistro upstairs called Abby Singer’s. You’re also able to bring in your own alcohol. When actors are in town, you can probably find them here. Nicolas Cage, Joel Schumacher, Matthew Roderick and James Gunn are just a few of the celebrities that have frequented the Robinson. “Our popcorn is wonderful and we show the best movies on the planet” says Executive Director Alexandyr Kent.

Open since 1927, Fertitta’s was a Sicilian grocery store and the first imported food store tucked away on Fairfield Avenue in what is now known as Shreveport’s “Blue Goose Historic District”. In the 1960’s though the neighborhood started to change and Papa Fertitta came up with the Muffy sandwich using their family recipe olive mix. Fertitta’s has

stayed in the family with Papa Sam Fertitta’s only daughter, Agatha, now running the business. Now their “Delicious Italian Muffy sandwich” is a national trademark selling over a million in 2008. “What really makes it a Muffy is the olive mix” says Agatha, which is her daddy’s recipe. A true muffaletta is from New Orleans, “this is not a muffaletta it’s a Muffy”. Pair it with momma’s mint ice tea mom’s recipe and you’ll know why folks from all over come to enjoy a Muffy at Fertitta’s

The Municipal Memorial Auditorium in Shreveport was built by Sam Weiner in 1929. The building itself has some interesting architecture with Star of David’s throughout the building, hand-etched concrete floors and authentic German light fixtures. Elvis Presley got his start here with the Louisiana Hayride. A local radio station broadcast the Hayride 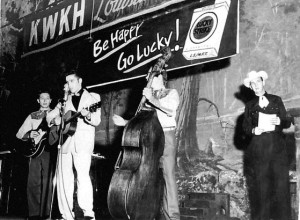 and it was considered to be the stepping stone to the Opry. There’s even a recording of the first time that Elvis performed here that you can enjoy. In fact, in front of the auditorium is one of only two streets in the country allowed to be named after Elvis. Music history and culture changed here because of the Hayride.

This church is located on Marshall Street in Shreveport and is over one hundred and fifty years old and has the oldest Catholic congregation in Northwest Louisiana. During the 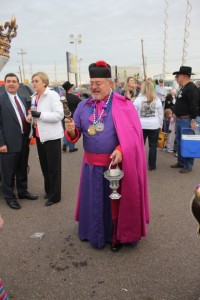 yellow fever epidemic in 1873, five priests lost their lives while helping the sick. Their dedication is memorialized by five stained glass windows in the church. Monsignor Earl Provenza also plays an important role in Mardi Gras activities. He blesses all of the floats the evening before the big parade. He also blesses the bridge on the parade route. The floats all meet on top of the bridge at 11:30 where the monsignor will proclaim Mardi Gras is over and gives them all ashes.

Cruise Down the Red River

The Spirit of the Red River cruise departs directly across from the Sci-Port in Shreveport and will take you along the historic Red River and Cross Bayou. The river was used during the Civil War to transport troops from Texas. You can see the riverboat casinos from a different perspective as well as cross under a unique A-frame bridge, one of only two left in the U.S. The Red River is one of the cleanest rivers in the United States as there is no industry along the river. As such, you’re likely to see lots of blue herons’, kingfishers, alligators and other wildlife. It’s also one of the hardest to navigate as it has a very strong current.

Shreveport and Bossier City are a great place to experience Cajun culture and cuisine but without the crowds that frequent other parts of the state. It’s also closer than you think, so consider a getaway and experience Louisiana’s Other Side.