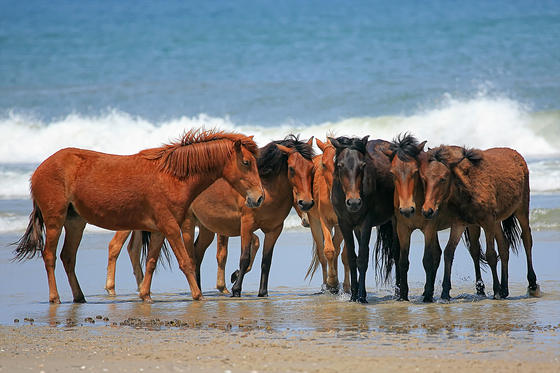 On the Outer Banks, things are wont to disappear. Ships go down, whether due to nature or human design. People often go poof! Around 1590, Sir Walter Raleigh’s entire colony on Roanoke Island– 120 men, women and children– all went missing.

Sand migrates due to little or no bedrock to anchor it. Birds and fish speed away, riding the shifting winds and tides. The weather, it can change in an instant.  Even the Hatteras Light, the region’s majestic landmark, is said to be in danger of slipping into the sea. 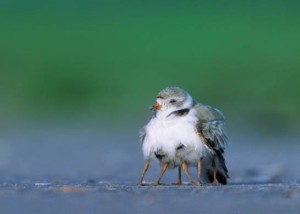 It’s just that way on the Banks– a string of fragile barrier islands that stretches more than 175 miles. The chain runs about two-thirds the length of North Carolina, from near the village of Corolla up north, down beyond Ocracoke Island, a three hours’ drive to the south. Many spots rise only seven to twelve feet above sea level.

Just north of Nags Head and Roanoke Island,  Corolla (cor-AH-la) is separated  from the state of Virginia by a fence jutting into the Atlantic.  Hordes of people flow over the Wright Memorial Bridge each summer. Patience is a plus. One paved road leads to and from the seaside town which can make traffic, entering and leaving the island, a challenge.

Corolla is a popular summer destination for water sport enthusiasts and outdoor naturalists alike. At sunrise, lazy waves roll across the cool sand. A pelican flaps its wings then stares down a ship at sea. A shorebird peels off its perch atop the only traffic light. A herd of the town’s wild horses trots through the surf, their manes blowing majestically, before heading inland to munch on marsh grass. 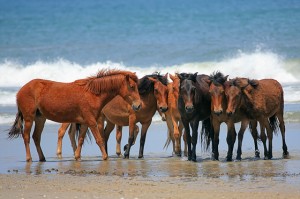 Smallish with a coloring of chestnut and black, the animals possess short backs, low-set tails and other traits that make them distinctive from other North American stock.  Thousands once roamed the length of the Outer Banks, the likely descendants from mounts that belonged to Spanish conquistadors five centuries ago.

The horses live in expanses largely free of human intrusion, an area designated as a Wild Horse Sanctuary. Visitors are advised to view them from a distance. Their population has tripled in the past 15 years as the land they occupy shrinks. Wild horse officials believe a larger herd will prevent inbreeding and improve genetic health. The past five years the herd size has averaged more than 100 horses. 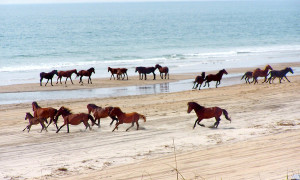 The Currituck Beach Lighthouse towers over Corolla, climbing to 162 feet.  Originally constructed from 1873-1875, the red brick structure is one of the few operational lighthouses in the country which allows guests to climb all 214 steps to the upper observation deck which boasts some of the best views of the Outer Banks. 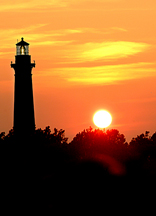 Jockey Ridge is often referred to as a “Living Dune” because the shifting winds on the Outer Banks are constantly changing its shape. It is home to the tallest natural sand dune system in the eastern United States. Rich in wildlife, it encompasses three distinct ecological environments– dunes, maritime thicket and Roanoke Sound Estuary where avid nature lovers come to explore. It is also one of the premier places in the country for hang gliding, sand boarding, and kite flying and in the evenings, sunsets are spectacular.

Nestled in the seclusion of stately water oaks and tall pines on the historic Currituck Sound is the two-story Inn at Corolla Lighthouse. The rooms are bright and airy, many have fireplaces and kitchenettes. There are cozy loft-style quarters on the top-floor. The pet-friendly inn offers complimentary bikes for an easy ride to the beach.  Spend your morning bird watching or crabbing, and then rent a kayak and paddle the sound.

For a swanky evening of cocktails and ambiance check out Metropolis with their extensive drink and tapas menu.  Over at Steamers Shellfish To Go, countless bushels of soft shell crabs supplied by a local family of crabbers have been the fare for nearly two decades. Check out the Outer Banks’ take on a New England style clambake– choice of shellfish, corn on the cob, red potatoes, onions with accessories such as claw crackers, butter, cocktail sauce and lemons. Enjoy a cocktail or frosty pint of beer while sharing a whopping pile of steamed spicy shrimp as the sun dips over Currituck Sound.

Totaling more than 4,000 acres, the Currituck National Wildlife Refuge takes in sandy beaches, grassy dunes, maritime forests, shrub thickets, and fresh and brackish marshes. Rare plants like the sea-beach amaranth grow at the base of rolling dunes. Established to protect the dynamic and fragile character of coastal barrier islands, the refuge provides a habitat to a variety of waterfowl, migratory birds, endangered species and native wildlife. 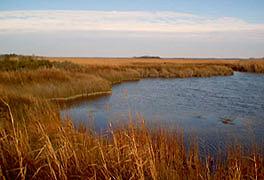 Visitors marvel at a myriad of wildlife– wading birds, shorebirds, waterfowl, raptors along with reptiles and amphibians. Endangered piping plovers and loggerhead sea turtles take advantage of the protected sandy beaches to lay their eggs.

One of the best times to visit is spring, when Corolla is awash in pink, fuchsia, and lavender blossoms of azaleas, wisteria, dogwoods and magnolias. While the area has grown substantially over the past two decades, Corolla’s edge of the world location is still a perfect place to gear down, relax and forget about your hurried life back home.