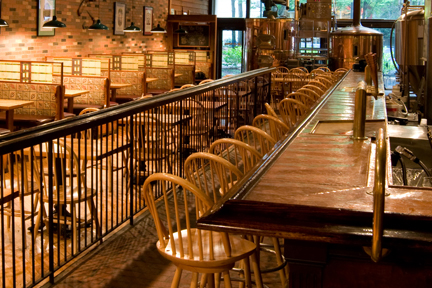 While our neighbor to the North (that would be Asheville) may tout itself as being “Beer City, USA”, the Upstate holds its own for local-made, quality-crafted beers and is rapidly gaining popularity as a premier beer destination.

Craft breweries are becoming more mainstream and several new breweries in the Upstate were announced last year. Quest Brewing Company opened in July 2013 while Brewery 85 and the Swamp Rabbit Brewery and Taproom are both expected to open in the next few months. They’ll be alongside Upstate veterans such as Thomas Creek Brewery, RJ Rockers and Blue Ridge Brewing Company.

Business owners in the industry see the Upstate becoming even more of a craft beer destination. “We’re just scratching the surface,” says Andy Moller, managing director of Greenville Brew Tours, “We may seem small but there’s a lot of potential in Greenville. The quality of breweries, access to capital, low cost locations and the recent pint law will fuel rapid growth across breweries, wineries and distilleries in the near future.”

Moller also points out that Upstate craft breweries are “a community” with everyone helping each other out.  “These guys are true craftsman,” says Moller. “Everybody’s in it together to have a better experience and it really comes across to make Greenville a better beer destination.”

participants a glimpse into how beer is made “from grain to glass,” said Moller. In March when the two new breweries open, he plans to expand into what he calls “an enhanced public model” which will allow individuals and couples to join Greenville Brew Tours for their “One Heck of a Ride” tours.

The tours encompass not just the breweries but Moller says they usually have a social stop at a rooftop location in downtown Greenville. This gives tour-goers a chance to learn about Greenville’s history and how the area is progressing in “exclusive locations most people would never get to see,” says Moller.

Tour options range from beer only tastings to a birth of beer tour where participants can learn not only how beer is made but also about the distributing process from a local distributor. Participants then go on to a local restaurant to learn how the restaurant selects which beers will be on tap. The most popular tour is the Bourbon and Beer tour says Moller, which incorporates not only area breweries but the Dark Corner Distillery in Greenville as well.

Here’s a quick look at the Upstate’s craft breweries…

RJ Rockers in Spartanburg was started in 1997 by owner and brewer Mark Johnsen who had loved brewing beer for his friends and family. The New Jersey native learned more about the brewing process while he was a member of the U.S. armed forces stationed in Germany. After he was discharged, he decided to take his beer to the public.

In Greenville, Thomas Creek Brewery has been brewing beer since 1998. Owner and Brewmaster, Tom Davis started with home brewing at an early age, he then moved into commercial brewing at a former brewpub in downtown Greenville. Tom’s ultimate venture into the microbrewery world of Thomas Creek encompasses his lifelong dream of brewing outstanding beers for a living.

Blue Ridge Brewing Company in downtown Greenville may be the oldest craft brewery in the area, opening its doors in 1995. After tasting the full-bodied, unique craft brews served in the rustic, comfortable atmospheres found in brewpubs throughout the Pacific Northwest, experienced restaurateur Bob Hiller decided to bring this concept home to Greenville, South Carolina.

One of the newest breweries on the scene is Quest Brewing Company which opened in July 2013. The

company officially started becoming a reality in January 2012.  That’s when Don Richardson and Andrew Watts met for the first time; each with thoughts of opening up a microbrewery in Greenville.  Both had put together plans for their company vision and, as luck would have it, those plans mirrored each other!  The two joined forces and Quest Brewing Company was founded.

Already starting to brew beer is Brewery 85 with a grand opening date set for February 1, 2014. President Will McCameron says they are experimenting with different strains of yeast that “we’ve harvested locally as well as using locally grown and kilned malts.” McCameron says they also plan on having a “fruit/berry orchard in the near future that we can use to harvest yeast and possibly use some of the fruit in experimental, tasting room only beers.”

Over in Travelers Rest, the Swamp Rabbit Brewery and Taproom is still under construction and hoping to open in late February. Tanks are expected to arrive later this month and then the brewing can begin!  Owner and brew master Ben Pierson, who has been brewing beer for more than 25 years, is planning on a “Bavarian” style of brewery.