Spotting the Rarest Whale on Earth 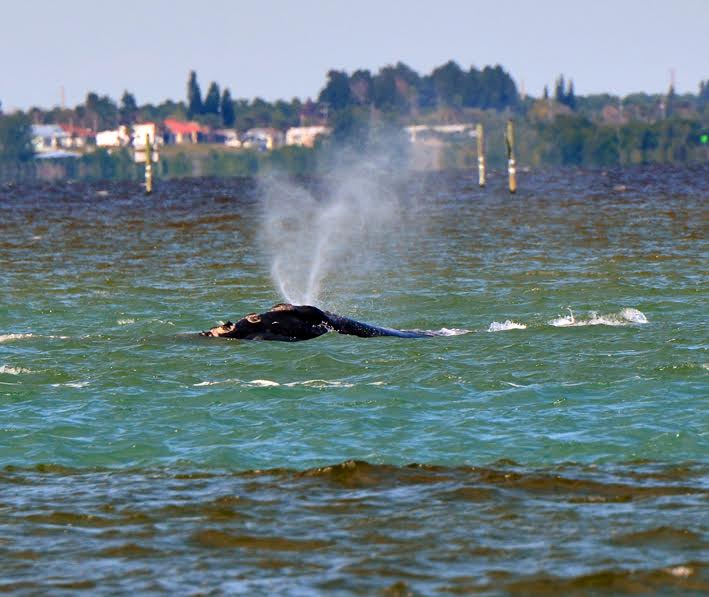 Each year from December through March a remarkable event takes place. North Atlantic right whales migrate to the warm, calm coastal waters of the southeast Atlantic coast to give birth and nurse their calves. Then in the spring they head back north to feeding grounds in the Bay of Fundy between Maine, New Brunswick, and Nova Scotia. 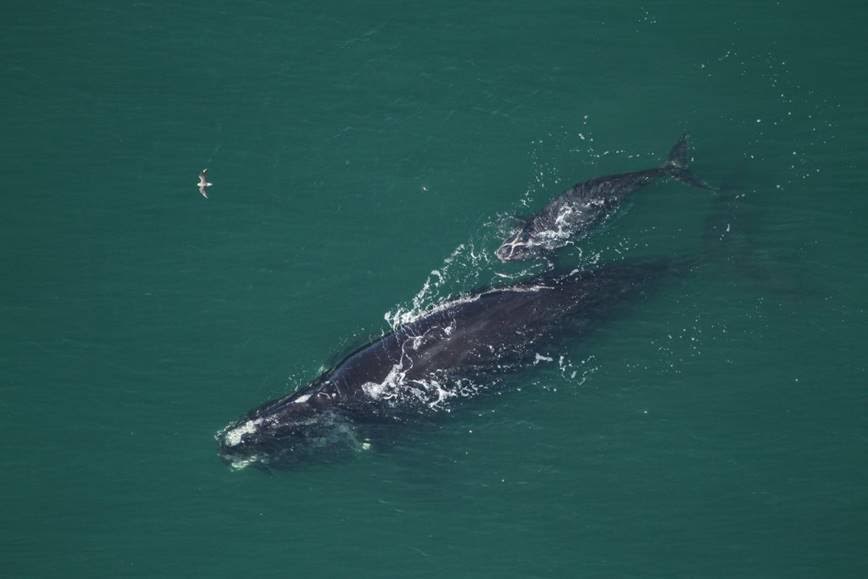 Some come within a couple hundred yards of the beach. Mothers can be seen schooling newborn calves, while juvenile whales frolic nearby. One of the most endangered marine mammals in the world, North Atlantic right whales reach lengths of up to 55 feet and can weigh from 40 to 70 tons. Mostly black with whitish patches on the head and belly, they have a graceful and deeply notched “fluke,” or tail. Two blowholes on the top of its head give a distinctive V-shape to a right whale’s spout.

In the early 1900s whalers, ironically, tagged them the “right whale” to kill. Residing in shallow coastal waters  the whales stayed close to land and swam slowly. Easy to harpoon, they tended conveniently to float after they died, thanks high levels of blubber, which whalers turned into valuable oil. Even more valuable was the baleen from its upper jaw. A tough yet flexible material in long strips that was finely fringed, it was coveted for everything from buggy whips ( “I’m going to whale on you”) to corset stays and umbrella ribs.

Today, about 500 North Atlantic right whales still survive after two decades of modest annual growth. Females give birth to their first calf at about 10 years old, but produce only one calf every 3 to 5 years which means protection and stewardship of these creatures are essential.

The right whale lives about 60 years, some as long as 100 years. The species faces natural threats from predators, large sharks and killer whales, which may affect the population. Today, about a third of right whale deaths are man-made: entanglements in fishing gear and ship strikes are the top two causes. 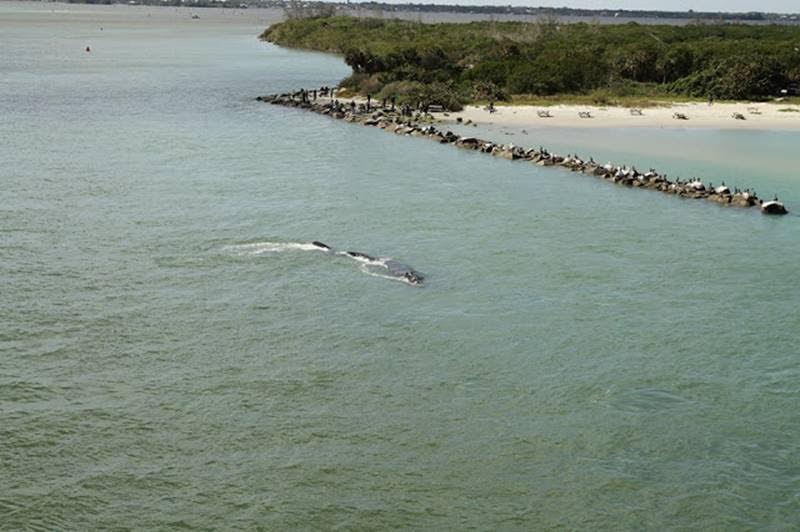 Last February a new danger emerged in the Sebastian Inlet in southern Melbourne Beach, Fla.  A North Atlantic right whale and her calf were spotted by bystanders on the Sebastian Inlet jetty pier just before noon. They made a wrong turn from the ocean that put them in the extremely shallow waters near the mouth of Indian River Lagoon.

The unfamiliar structure of the Sebastian Inlet bridge, plus a low tide seemed to baffle the whales. The 45-foot long mother and her 18-foot calf spent much of the night “boxing” or swimming back and forth in the inlet. Swimming west inside the inlet, a left or right turn could have resulted in a 30-mile swim before they found another inlet. 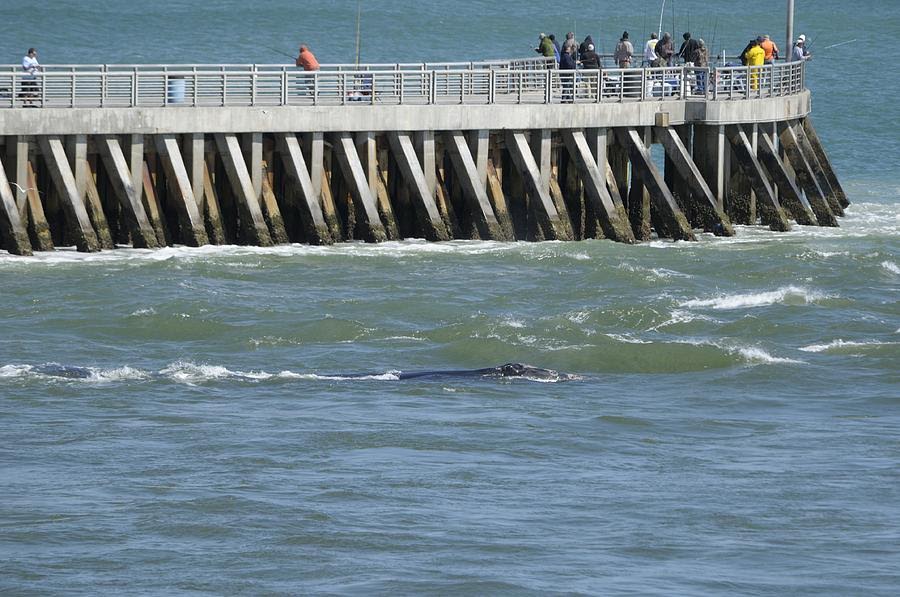 After 16 attempts, the next morning the mother eventually coaxed her calf to cross under State Road A1A out to the Atlantic and headed north. Biologists referred to the female whale as “Clipper,” for a missing chunk of her right fin. Clipper’s sighting history began in 2004, and she has been documented during several winter seasons.

A Fish and Wildlife Commission airplane flying overhead tracked the whales, and also kept oncoming boats from getting too close. Their officers said they have tried to corral and herd whales in a certain direction in the past and it doesn’t work.

For the two whales, navigating the bridge was tricky. Researchers have seen the same thing happen with young dolphins and suspect it has something to do with the shadows cast by the span.

“In my 17 years of doing this, I have not seen right whales doing this inside of Sebastian Inlet,” said Julie Albert, the conservation program coordinator for the nonprofit Marine Resources Council.

“Each time they approached a shadow cast by the bridge, the baby turned back. Maybe it’s kind of a perceived barrier. The shadows are not something they’re used to in the open ocean, perhaps clouds once in a while. Some have speculated it could have been the noise coming down the pilings into the water of cars going over the bridge. That might have thrown them off.”

Right whales are protected under the U.S. Endangered Species Act and the Marine Mammal Protection Act. To lessen the risk of collisions between whales and boats, federal law requires vessels 65 feet long and greater to slow to 10 knots or less in Seasonal Management Areas along the U.S. Eastern Seaboard, including the calving and nursery area in the southeastern U.S.

National Oceanic and Atmospheric Administration officials want people to give the whales a little more space. Banners are flown at beaches to warn people to stay 500 yards away from the whales, which applies to watercraft or aircraft, including paddle boards and surfboards. Violations can result in civil or criminal penalties of up to $50,000 and a year in prison.

The right whales were among the first species added to the Endangered Species List and in 1994 numbered as low as 300. They are closely followed by scientists armed with cameras and other research tools carrying out observations that secure data on swim speed, behavior, and directional movement along with photo-identification of individual whales  supplemented by aerial observations.

In Brevard County in central Florida there are 800 volunteers who work with the Marine Resource Council calling in right whale sightings during calving season to a hot line that alerts nearby vessels that whales are in the area.

“Recent governmental action has slowed the speed of ships and the shipping lanes have been moved out of migratory paths of whales,” Albert said. “We make sure Port Canaveral is aware of where the whales are. We also present a variety of classes and special events on how to recognize the whales, anything we can do to educate the public.”

Right whales migrate to higher latitudes during spring and summer. Year round, right whales can be found from Cape Cod to Nova Scotia – an area the whales use for feeding and mating. Each fall, pregnant females travel from this area more than 1,000 miles to their only known – and likely only – calving area.

“I’ve always been fascinated by whales,” said Albert who moved to Florida in 1999. “It’s special to see them in the wild. I’m a mother of three children so I get it. They have a mother’s characteristics. Being tired and wanting to rest when you have to deal with toddlers who want to play. They’re so gentle, yet they’re so immense when you see them near surfers. They are truly wondrous creatures.”