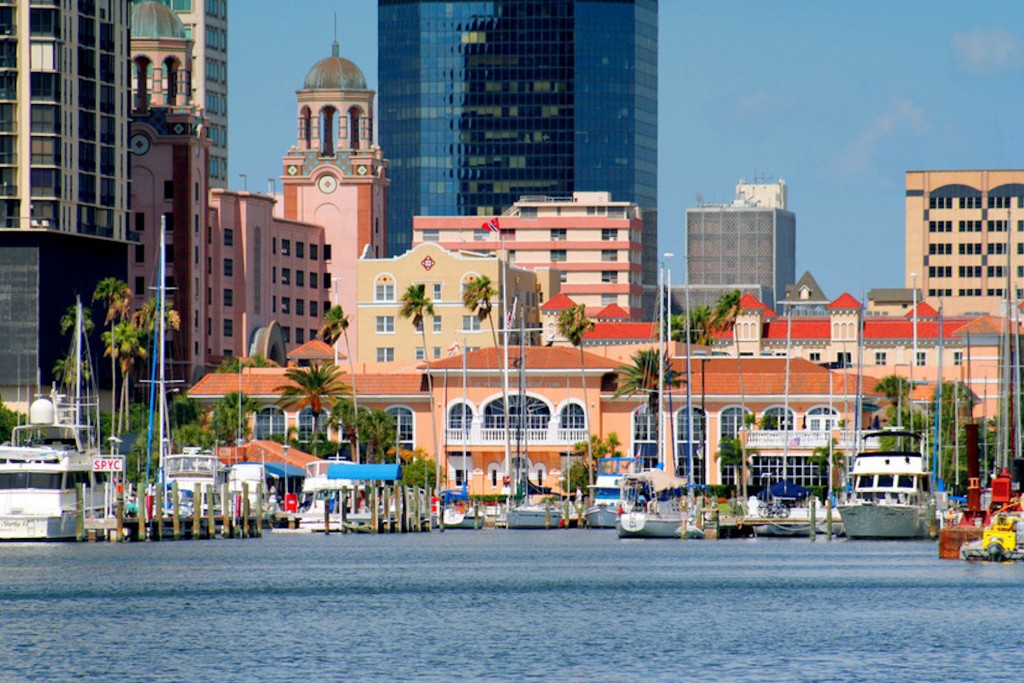 Talk about an extreme makeover. Once taunted for its green benches, bingo nights and sluggish snowbirds, today St. Petersburg, Fla. is a textbook case for urban reinvention.

Sitting midway up the west coast of the Sunshine State, St. Pete is powered by its gorgeous waterfront, the stunning Dali Museum, and a stream of trendy dining options and new hotels and inns. So much so, earlier this year it was tabbed among the “52 Places to Go in 2014” by the New York Times. It clocked in at No. 49, ahead of Belize, New Caledonia and Niagara Falls, N. Y.

Peter Demens named the area after his birthplace. Born Pyotr Dementyev, the Russian aristocrat had immigrated to America. In June 1888 he brought the Orange Belt Railway to St. Petersburg, opening up the region to become a tourist destination for wintering retirees up north.

Star power also reigns at the Salvador Dali Museum, an eye-popping tribute to the Spanish artist’s surrealistic works. Back in the 1970s St. Pete cleverly snapped up an impressive Dali collection by building a museum for a Cleveland couple’s treasure trove of Dali’s works. Since the museum’s opening it has played a large part in making the city a destination for culture lovers from around the globe.

On 1/11/11 the new Dali museum opened at a cost of $36 million. Designed by world-renowned architect Yann Weymouth of HOK Tampa, it took two years to complete and occupies a prime spot overlooking the bay at the south Yacht Basin.

The mind-bending, bulbous building is a concrete trapezoid wrapped in an undulating wave of glass and steel. Its solid structure — with 18-inch-thick walls — was constructed to withstand a Category-5 hurricane. Designed as a salute to the Dalí museum in Spain, it is topped by Buckminster Fuller geodesic domes that are composed of 1062 triangles jutting out 50 feet above the ground. No two are identical. Another architectural feat is a soaring spiral staircase of solid concrete, a nod to the artist’s fascination with the double-helical structure of DNA.

The Dali collection includes 96 oil paintings, a collection of 100 watercolors and drawings, 1,300 graphics, sculptures and other objects d’art. Works represent every period of his career with masterworks such as “The Average Bureaucrat” (1930), “The Disintegration of the Persistence of Memory” (1952-54) and “Portrait of My Dead Brother” (1963).

Dali’s artwork is intriguing, mysterious and some paintings, downright creepy. Be sure to take one of the 45 minute docent led tours so you can fully grasp the complexities of Dali’s works. Our docent, Judith Overcash, is exceptionally knowledgeable about Dali’s life, his art and the museum itself. She opened our eyes and mind to the artist’s work and times, explaining the not so obvious meaning behind some of his most provocative artwork.

An Andy Warhol traveling exhibit came to the Dali in January as staffers donned white-blonde wigs and red-rimmed glasses. “Warhol: Art, Fame, Mortality” melded two of the most eccentric minds of the art world in an exhibition that featured more than 100 works including paintings, drawings, sculpture, photographs and films. Among the pieces exhibited were ten of the pop art bon vivant’s most famous screen tests of notorious culture figures including “Mona Lisa,” “Marilyn Monroe” and the “Campbell Soup Can.”

There are several other top-notch museums downtown such as the Museum of Fine Art that features Euro masters Monet, Renoir and Cezanne. The Chihuly Museum celebrates American glass-sculptor Dale Chihuly via a clutch of bright works. St. Pete is also home to music and theater at the Progress Energy Center for the Arts, the Mahaffey Theater and intimate venues such as the Palladium Theater and American Stage. The downtown gallery district provides exhibition space for a diverse range of local and regional art exhibits.

Looking to be part of St. Pete’s glamorous past? Book a stay at the Don CeSar Beach Hotel. Built in 1928, the flamingo-pink grand hotel with Moorish bell towers and Mediterranean styled arches with red clay tile roofs is just steps from the Gulf of Mexico. During the “Jazz Age” it drew big-timers like Al Capone, Lou Gehrig, novelist F. Scott Fitzgerald and his glamorous dancer wife Zelda.

Its Carrara marble floors and oak beamed ceilings have remained untouched over the years. Today, “The Don” is operated by Loews Hotel and Resorts that has completed several major enhancement projects, including the Spa Oceana which features over 11,000 square feet of spa facilities. There are a pair of captivating beachside pools and a trio of restaurants, including the four-diamond Maritana Grille. Many of the hotel’s 277 rooms offer spectacular views of Boca Ciega Bay and the Gulf.

It’s a 15-minute ride back into rejuvenated downtown St. Pete. The once empty sidewalks on Beach Drive are bustling with multi-national tourists dining at outdoor tables at eateries such as Cassis American Brasserie. Across from the marina, it is a perfect spot to combine an eclectic food menu with people- watching. Named after a charming town on the French Riviera, we opted for a delicious croque madame sandwich and the grilled chicken breast salad.

Rococo Steak is a modern departure from the traditional steakhouse. Set in a restored 1920s Neoclassical Revival former YMCA building, it boasts a chic interior with deep gray walls, white cove ceilings and ruby-red chandeliers. Its menu rivals the dramatic space. Begin your visit with a smart and slightly quirky list of wines by the glass and innovative craft cocktails. Start with free-range fried chicken-lollipops or the bacon flight consisting of three artisanal styles alongside grilled bread from Panera Bread. Still, the core of the menu is beef, from filet to rib eye, you can tuck into either corn-fed or grass-fed.

Named for the iconic benches that lined Central Avenue in the early 1900s, the brewpub serves a dozen beers on tap. The Green Bench IPA is their “bench-mark” beer, a medium bodied ale with aromas of soft citrus and earthy pine combined with very subtle notes of tropical fruit a hop-forward pale ale. The Skyway Wheat is a hop forward American Wheat Ale, packed with four different hop varieties that delivers a citrusy and pine-like flavor. It’s named for the nearby Sunshine Skyway that stretches 431 feet at its peak, and is over four miles long, connecting St. Pete to the Terra Ceia waters.

It’s all part of the burgeoning arts and culture, food & drink fueled renaissance. More than a century later St. Pete is fulfilling the dreams of its founders who so cherished this sun-kissed destination, one that still revels in a community of pelicans, porpoises, and sailboats gliding across the sparkling Tampa Bay.