Stepping Back in Time at the Rod & Gun Club-Everglades City, FL

Royal palms and tin rooftops vie for the town’s tallest point. Fishing rods poke from open windows of cottages and dusty pickups, an outward reminder of the area’s livelihood. At dockside, skiffs and canoes head out while charter captains and guides pick up guests for a day of fishing the flats and backwaters of the glades.

Travel down the west coast of Florida, past Naples and Marco Island until you can’t go any farther. Then you’re there, the sleepy “Old Florida” city of Everglades City. It is pretty much the last outpost of civilization before the land turns into a maze of mangrove islands of the Everglades.

The “river of grass” is unlike any spot on earth.  A boggy wilderness, its eco-sights remain relatively unchanged from ancient times– everything from bellowing alligators and fragile ghost orchids to towering green cypress. The swampy abyss is also the critical breeding ground for a large variety of wading birds.

With a population of 400 and an elevation of three feet, Everglades City has been welcoming American presidents and Supreme Court justices, corporate titans and celebrities, serious anglers and birders since the 1880s, when only small boats and yachts reached Florida’s last lonely frontier.

The town’s most favored retreat is the Everglades Rod and Gun Club, perched on the Barron River.  The three-story, white clapboard lodge still casts a spell from the Rod and Gun Club’s epic early days. Walk through the weathered, single-hung back door and that past comes alive with the marble and brass at the registration desk and the dark brown pecky cypress paneling that blankets the dining room walls adorned with mounted grouper and tarpon trophies, the deer and ‘gator skins.

The 1850s structure was first built as a lodge for fur traders at the site of the first permanent white settlement in the area. Previously it was only enjoyed by Caloosa Indian tribes. By the 1920s among the Rod and Gun Club’s regular guests was a New York advertising pioneer, Barron G. Collier, who amassed a fortune dotting New York’s street corners with a chain of newsstands and papering its subways with advertising placards. 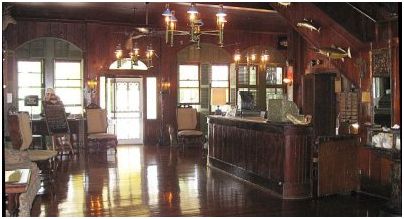 Collier is primarily responsible for the foundation of Everglades City as you see it today. In 1923 Collier and his company purchased most of the land in and surrounding the town. Within five years the sleepy trading post and farming community was converted into a bustling industrial-based company town complete with roads, a railroad, a bank, a telephone, sawmills, a boatyard, churches, a school, workers’ barracks and mess halls, and even its own streetcar at one time.

Today’s version is owned and operated by Shooting Authority, the Bowen family who pay homage by maintaining its old frontier values and rustic charm. The facilities include a large heated and screened pool, tennis and shuffleboard courts, charter fishing boats and local guides, the Blue Pigeon Inn lounge and extensive marina facilities.

Settle into the wicker furniture along a grand old screened porch which is ideal for watching the pelicans perched on the pilings or spying the river traffic. Boats can tie up along the seawall. Larger fishing boats, the birds, the mangroves beyond spread out further on.

Guests are lodged in the cottages scattered under the trees, rustic and comfortable hideaways with simple furnishings. Fresh seafood dominates, stone crab claws are king in season (October 15-May 15). Crabbers can drop their traps on October 15, but have to wait 10 days to start retrieving them. Stone crabbing is now a multimillion-dollar business. The claws caught by the local crabbers are shipped all over the world. 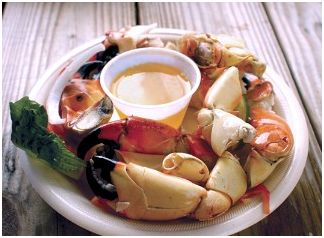 Keep an eye out for the surf-and-turf combo of steak and grouper, a swamp-and-turf combo of frogs’ legs and steak, and seafood and pasta pairings. The Club will prepare your catch of the day, serving it to you with style in the dining room just off the lobby.

The Club will arrange a box lunch for your expeditions.   Hire a guide and head over to Barron River with miles of snaking backwater and open bays. The shore is lined with mangroves and the tidal water moves fast in the river. There are oysters and sandbars and many small creeks making this river a fantastic habitat for snook, trout, redfish and tarpon. 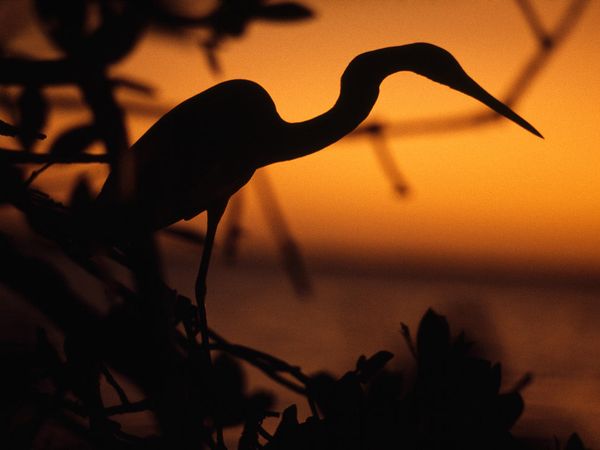 After a day on the water scan the historic newspaper clippings and photos in the Club’s lobby. You will learn about its colorful, sometime roguish past. Finally, enjoy at drink at the Pelican Lounge then watch the unforgettable sight of the flights of ibis and great egret in low formations over the green wall of mangroves at a glorious sunset.