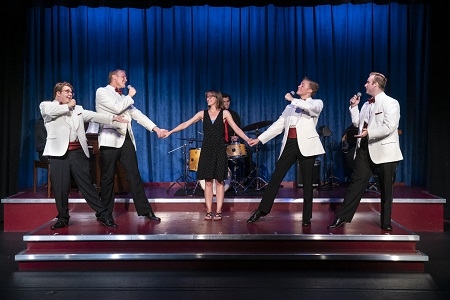 SummerTide, the University of  Alabama’s  professional summer theatre, returns to Gulf Shores in June, 2021, with “Starting Here, Starting Now,” a musical revue featuring the songs of  award-winning Broadway veterans Richard Maltby Jr. and David Shire. Matt Davis, the show’s director, says that the musical was a natural choice following SummerTide’s enforced hiatus caused by COVID-19.  “The songs relate to the renewal of love, or to finding out what love is for the first time. The ongoing theme is abour restarting, which is what we’re doing.”

Davis, an  Assistant Professor and Head of Directing and Stage Management at University of Alabama, says that this is his first SummerTide and that he’s excited to  show what his students are capable of achieving to people from all over. When the 2020 season had to be cancelled,  the Department of Theatre and Dance switched its energy to  the academic year, concentrating on work the students could safely do with the department. Davis calls the year “a learning process. We were able to develop composition more freely, starting to invest in more design elements.” The problem of working around the mask mandate also led to innovations in performance: “knowing how to live in a world where we are able to understand emotions through the whole body and entire self—this is the essence of storytelling in a different way.”

“Starting Here, Starting Now” was created by Maltby and Shire as a vehicle for great songs written for shows which, for a variety of reasons, never made it to Broadway. It ordinarily calls for a cast of three, but Davis added two cast members. This was not difficult, he says, because the play’s format is a revue or cabaret with each song telling a separate story.  Adding the two cast members insures that the show will always be able to go on. In a departure from earlier productions, each cast member will learn all the songs, not just the ones for their particular character. Davis says  “the more students you involve, the more opportunities you are giving.” He adds “the show is a lot of fun, and we encourage everybody to come out and celebrate our return with us.”