Take a Drive on the Wild Side this Holiday Season at Hollywild in Wellford, South Carolina 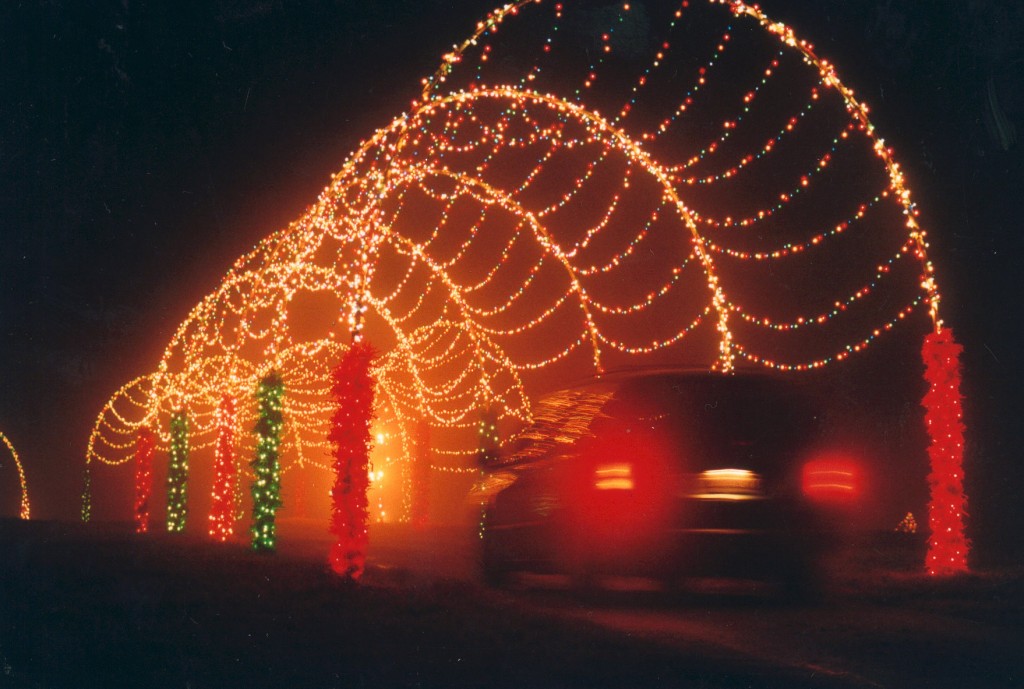 Deer, Lights, and Marshmallows…oh my! Each year from Thanksgiving to New Years, Hollywild Animal Park in Wellford, South Carolina opens its 100-acre safari to provide a unique holiday experience while raising money to care for their resident animals.  The rest of the year, visitors’ tour by foot and by a safari bus, but during the holiday season, you can drive your own vehicle through the open range area of the park. 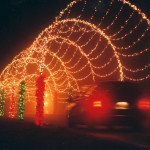 Holiday Lights Safari.  The preparation for this event, now in its 23rd year, begins in July with redesigning of light displays and tweaking of traffic patterns to change how visitors will drive through the park. Once inside the park, visitors follow a dazzling display of over a million lights, nativity displays and light sculptures such as dancing reindeer all while holiday music is playing from loudspeakers nestled in the displays.  “We try to give people great, unforgettable holiday moments”, says David Meeks, Founder and Executive Director of Hollywild.

The tour also takes visitors through Deer Park, where from your car you can feed free-roaming deer, zebra, geese, antelope and cows. On weekends, when the park is packed, this gives a whole new meaning to the phrase “deer in headlights”! The animals move from car to car and while the deer are a little skittish, it’s not unusual for a zebra to stick its head in your car window to get something to eat.  About 100 animals are out at a time and even though it may seem like chaos, it’s all organized as park employees are on hand to keep an eye on the animals. Both kids and adults love feeding the animals.

Once you’ve finished at Deer Park (there is no time limit) you’ll meander along more light displays until you get to Santa’s Village.  This stop keeps getting bigger and better each year and allows you to get out of your car and enjoy a huge bonfire with hot dog and marshmallow roasting, hot cocoa and cider. There are baby bottles available for purchase that you can use to feed baby goats, pigs, deer and antelope. You can also feed and pet other animals such as donkeys, goats, llamas, bison and Holstein cows. This is a great spot to meet up with neighbors and friends and it’s possible to spend hours feeding the animals and sitting around enjoying the bonfire and basking in the holiday spirit.

While at Santa’s Village, be sure to visit the lookout spot at Mrs. Clauses’ Candy Shop.  This is a great photo spot and you can see the light displays over the park. Another must-do here for the kids is to take a pony ride through the enchanted forest.  The ponies meander through a tree lit path which is a much better experience than riding around in a circle as other pony rides seem to do. Of course, it wouldn’t be Santa’s Village if Santa didn’t make an appearance.  He hangs out on his sleigh and parents can get a photo of their kids next to Santa driving. “We want kids to have a blast…to be the highlight of their Christmas memories” says Mr. Meeks.

When David Meeks finished college, he had already discovered he had a knack for interacting with animals and it was his goal to build a zoo.  So he went home to his family farm and he and his dad started the M&M petting zoo with just a few animals. The zoo kept growing year after year with David rescuing a lot of his animals from zoos throughout the country that were shutting down.  Word got around and people in Hollywood started to learn about David Meeks, his animals and talents. Since the 1970’s David and his animals have been in over sixty two feature movies. “Tank”, the only working Rhino in the US, has been at the park for 22 years and is Hollywild’s most famous star… you’ll recognize him from the current ZICAM commercials. 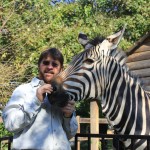 Zeke the Zebra who has starred in Land Rover commercials and the Siberian Tigers who were in the movie “Manhunter”, David changed the zoo’s name to something more fitting, Hollywild Animal Park. The animals are always his priority so in 1999 he converted Hollywild to a 5013C non-profit corporation, to ensure that if something happens to him, the park will keep going.

A passionate animal lover and enthusiastic person, David is at the park every day caring and feeding the animals and tending to the park. Never far, his home is actually in the middle of the park, he continues to enhance Hollywild with new attractions. The Holiday Lights Safari is an extremely important event; it is when the park receives the majority of their operating money and capital for new projects. With a better is bigger attitude and if the funds come in, there are some great new attractions planned for 2011 such as a new bear exhibit, a new aviary and much more.

Directions: It’s about a 45 minute drive from Simpsonville. Print out and follow the directions provided on their website at www.hollywild.com.  From personal experience, GPS’s don’t always take you on the quickest or most direct route to the park.

Admission: $5.00 per person (children 24 months and under are free). Group discounts are available. Bring some extra cash for animal food and snacks.